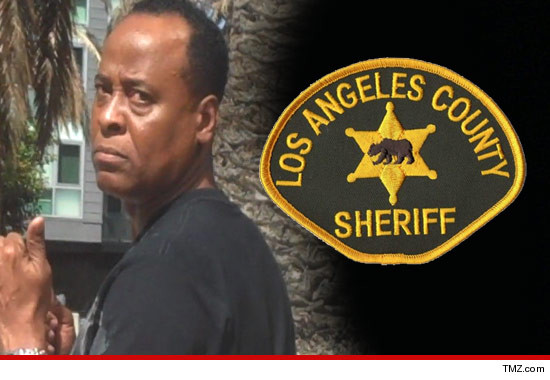 Recording artist, entertainer, dancer, actor, businessman Michael Jackson was killed nearly four years ago as result of involuntary manslaughter. Convicted felon Conrad Murray has served little over one year into his four year prison sentence for the crime.Attorneys J. Michael Flanagan and Valerie Wass both responded to distress calls when notified that Murray was experiencing right arm and shoulder pain. Last October, Flanagan and Wass described as Murray having “a slow death caused by a loss of circulation and atrophy resulting from inhumane confinement of a large man in a tiny space.”Wass claims Flanagan denied her entry as he’d arrived at visitation first, and was shoved by Flanagan’s 30 year old son Ryan. Flanagan was seen in the documentary “Michael Jackson and the Doctor: A Fatal Friendship” which aired shortly before Murray’s conviction, and has acrimoniously parted ways with his client in the past.Wass has filed a battery report against Flanagan, claiming she was shouted out of the room, Eventually, she met with her client, who witnessed the incident.Time Magazine described Jackson as “star of records, radio, rock video.” Jackson achieved twelve #1 songs on the U.S. Billboard Hot 100 chart. This figure does not include his achievements as part of a duo or group.