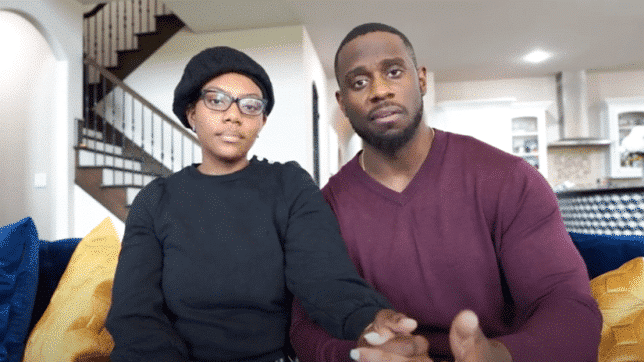 I had never heard of Derrick Jaxn before this weekend but apparently he is a relationship “guru” who has millions of fans and he sells quite a bit of merchandise online in concert with his strong belief in being loyal in one’s marriage and vows.

Derrick Jaxn does videos about relationships and he is not only articulate and motivating (until this most recent video with his wife which is not only strange it looks staged) but he is quite the savvy businessman according to his site and the merchandise he sells. This includes several sold-out books, cards, and more. He is said to be a millionaire via his “Self Love Ambassador” concepts several times overall via his online efforts. He makes many of his videos in his car and gives great advice to women who are his biggest followers.

Yet, apparently, he just got busted for having an affair with a woman and that is what all of the posts were about calling him a fraud and a fake and saying that he was taking advantage of people and that he’s not an actual influencer.

In this video, Jaxn appears with his wife explaining that he is a man of God and that he is capable of making mistakes. Unfortunately, according to the downvotes on his Youtube page more people are not buying it than those buying it. For a man who is a great communicator I have to admit the apology video does look incredibly insincere.

To add insult to injury he is selling his merchandise underneath the apology video and you can’t help but look at how his wife looks extremely uncomfortable in this video … almost like a hostage who is forced to cooperate to keep generating the wads of income he is making.

We have to be very careful when we not only call ourselves influencers and present ourselves as perfect, but also who we CONSIDER to be influencers. There are people in the black community that think preachers never belch and are men of God but at the end of the day NOBODY should speak to YOU for YOUR higher power BUT your higher power.

What Happened to Crystal Jones from TLC

It’s not so much Derrick Jaxn’s fault the he calls himself an influencer as much as it is that people believe he is perfect. Below his apology video there’s a hilarious video where this couple is imitating them and how his wife looks like a hostage enjoy

Nahhh this Derrick Jaxn skit got me crying N&*$a said “I read the Bible backwards and upside down” ??? pic.twitter.com/Sd96dv256F