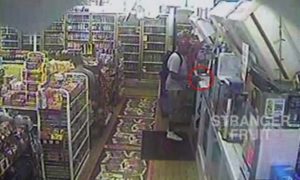 There are three sides to every story. His story, her story, and the truth.  If you don’t recall, August 9th, 2014 an unarmed 18-year-old named Michael Brown was killed by Officer Darren Wilson. Michael’s death instantly became viral news and sparked protests for him worldwide. The sad part is Mike Brown never had the opportunity to tell his side of the story.

So what really happened in Ferguson, Missouri? “Stranger Fruit” is the story of what happened to Mike Brown, told through the eyes of those closest to him. Michael Brown’s family members bravely retell the worst event of their lives to try to help the world understand the facts around what took place. Filmmaker Jason Pollock delivers an in depth look at the facts of Mike Brown’s case in an effort unravel the mystery.

This film was the talk of SXSW film festival as  Jason Pollock acquired the new tape of Mike Brown at the infamous convenience store. This new footage challenges the police narrative that Brown committed a strong-armed robbery when he returned to the store around noon that day.  The filmmaker believes that the new video shows Mike Brown giving a small bag of marijuana to store employees and receiving cigarillos in return as part of a negotiated deal. Pollack is insulating that Mike Brown left the cigarillos behind the counter for safekeeping.  Although lawyers representing the store vehemently deny there was some sort of exchange, the video appears to show different.

Radio Facts - January 6, 2021 0
Best Cities to Live in For Musicians and Average Rent Prices per CityRadio Facts: "Back in the day on the boulevard of Linden, we...

WE PREDICTED THIS: CBS Radio stations, TV to mix and match...

Alliance for Women in Media 2012 Board of Directors Announced