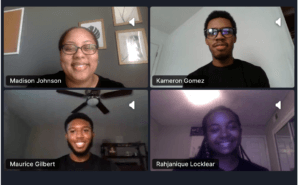 If you are familiar with Shark Tank, then you know it’s all about the pitch when you are trying to get someone to invest in your business. Take the same Shark Tank concept and add a little HBCU flavor and you get Moguls in the Making.  We must say congrats to a few Florida A&M University (FAMU) students who placed second in the 2020 Moguls in the Making competition. The FAMU team was one of 50 historically Black college and university (HBCU) students who had the opportunity to compete in the business skills competition.Backed by Detroit’s own Big Sean, the competition is in its second year.  The FAMU team pitched a winning idea about an Autoshare concept– which includes community pooling of resources with usage-based pricing, cost-sharing and low and fixed membership rates – to help Detroiters who struggle to get their own cars. The team also proposed applying a credit union model to auto insurance to help lower insurance rates in the city of Detroit.While FAMU is happy about the second place win,  The Alabama A&M University team placed first. Hampton University and the Spelman College/Morehouse College teams tied for third place. The FAMU team took the top prize in 2019 when the competition first kicked off.It is good see HBCU’s about that business life.