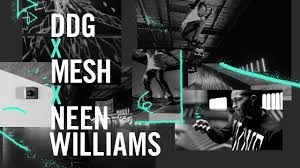 Today Sony kicks-off The Sony Collaboration Series with a project teaming up-and-coming Sony Music rapper and YouTube phenomenon DDG, pro-skater Neen Williams, and Sony MESH IoT blocks, a platform of app-enabled smart sensors, to create a truly unique new interactive music video.Filmed at The Berrics, an iconic skatepark in Los Angeles, the collaboration creates something truly unique as a gravity-defying skate performance is combined with extraordinary audio and visuals triggered by the MESH.“The Sony collaboration with Neen was a dope new way to turn my song into a whole different vibe. I never envisioned a skateboarding song when I made ‘Push’, but seeing Neen vibe out to the record and Sony’s MESH sensors and projectors’ lights going crazy to my song convinced me. I’ve never been a part of something so innovative. It came out so dope,” said DDG.This week Sony unveiled the innovative, new brand campaign that will showcase all that the world of Sony has to offer through the power of creativity and technology. The Sony Collaboration Series campaign features experimental projects built by pairing the hottest Sony Music Entertainment (SME) artists with the latest Sony technology, gaming, and movies. Future collaborations will surround Sony’s upcoming film “Bad Boys for Life,” Sony’s 360 RA, the PS4 “Dream Universe” and more!