Over the years of doing a Radio site, I’ve seen podcasting, audiobooks, music streaming, and online voice-over portals explode and completely change the broadcast industry. In this process, I was stunned to see radio corporations seemingly sit idly by as if it would not affect them. 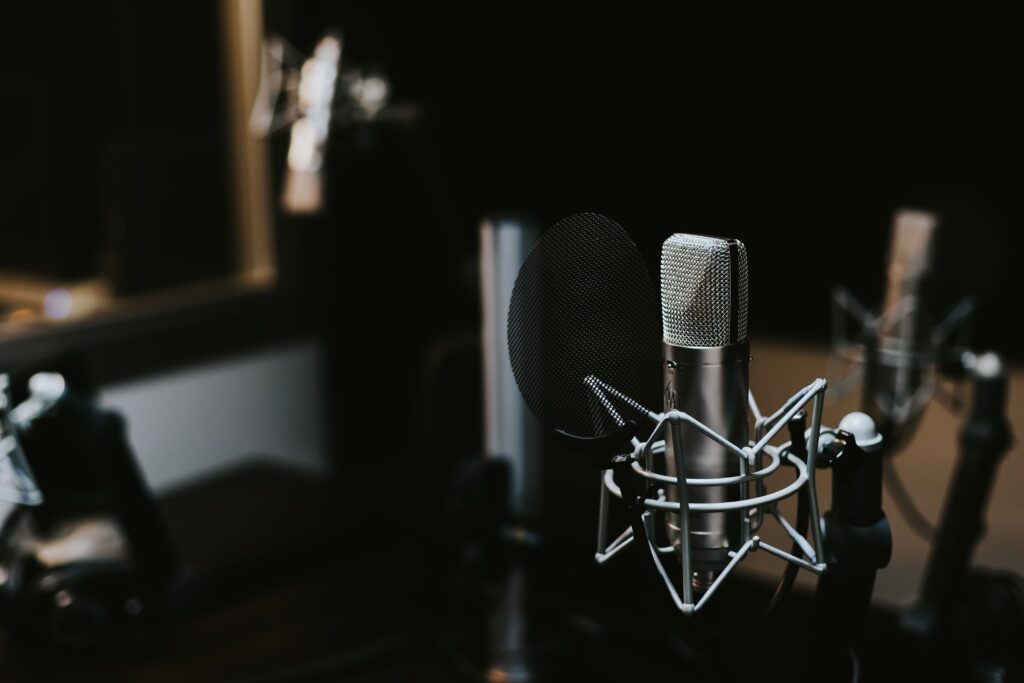 The only corporation that I can honestly say heard the train coming and got off the tracks by updating their brand and expanding is iHeartMedia.

They changed their name from Clear Channel and rebranded as a media corporation instead of a radio corporation.

And even though the corporation still has debt, their online presence is stellar and the company does an excellent job of promoting everything they do.

Besides radio sitting idly by, I’ve also watched Newspapers all but disappear as well as the cable industry lose its power over consumers’ wallets and purses.

Newspapers have adapted by taking everything primarily online and charging subscription rates.

It is rare that you see newspapers being delivered anymore and if you sit at your local coffee shop the only people reading newspapers are generally baby boomers.

Cable could have saved itself years ago by offering smaller packages of perhaps 10 channels instead of a whopping 500 (exaggerating) channels that nobody has time to watch.

Now hundreds of smaller digital apps and Netflix have taken over.

Newspapers, radio, and cable have pretty much all been in the same grouping for many years and all were a way to communicate with the listeners, viewers, and readership.

Radio was basically the liaison between the music, stars, and listeners.

DJs were the narrators or the hosts that brought that music to the listeners and with Black radio, community service programs and news were the highlights on radio stations.

Fans would get excited when a star would call in or appear on the morning shows of many radio stations.

Today, listeners have direct access to the stars via social media. Even to the point that they can have conversations with them sans the radio middleman. 20 years ago, even 10 years ago that was unheard of. But that’s not all…

Today there are several other morning shows that are syndicated.

This process interrupted the cycle of a DJ moving up the ranks at a radio station. Usually, he or she would start as a part-timer, then they would work the dreaded graveyard shift, then they would either get nights or middays, then they would get the coveted afternoon drive show or mornings.

Syndication stopped that process. The morning show was the apex of a jock’s success but with syndicated shows blocking the opportunities, many potential radio DJs lost interest in radio.

DJs are generally one-trick ponies so it was not surprising to see many of them not jump on board with the burgeoning, more financially beneficial, technology right before them.

They wanted to be on the air or nothing at all.

Now, there is a shortage of DJs and radio is thinking they can pull people from the podcast industry to be DJs.

While they may have some luck these people would be coming into the industry without training but with leverage. That’s not going to be cheap.

The really sad thing about it is, they will make more money than trained jocks who have been working at the craft for many years because the leverage they bring is followers and influence.

It’s a very unfair and a double-edged sword because radio corporations are uber protective of their brands. So radio DJs have been under strict rules as to what they can post on social media and how they have to represent the station.

On the other hand, influencers are picked because of what they have done on their own on social media which has few rules. This by and large is what has allowed them to get followers and what has kept radio DJ follower numbers much leaner.

Several radio program directors have admitted that they are having a hard time finding DJs and finding podcasters is the next step.

V103 in Atlanta tried it with influencer and singer Jade Novah and it didn’t last very long. To be fair they also hired J.R from JR Sports Brief who had amassed 80 million views as an inexperienced sports show host that he started from his bedroom in New York.

On the station’s site, she is described as Nikki Blades is a member of 99.7 NOW’s Morning Show, a Podcast Personality, entrepreneur, model, and athlete with a strong social media presence.

Blades is the total package that includes the aforementioned as well as a merch site where everything is marked “sold out.”

There are others but the point is radio stations are pretty much going to benefit but they are also going to have to PAY a LOT more by using influencers instead of DJs.

The question is do the influencers want to be on a corporate leash when they are making so much more money running their own social media channels as well as dealing directly with corporations and ad agencies?

Radio likes to have control of the money and the talent on the air but in these cases that’s will be all but gone and a smart influencer will make sure their contract allows them to continue to operate as an independent entity.

Where does this leave today’s radio DJs?

Unfortunately, corporate radio stations have to make a choice between advertisers, syndication/influencers, and DJs. DJs are probably not going to prosper in this case.

Radio stations depend on a rating system called PPM (Portable People Meter) it’s a company owned by Nielsen. Basically, a sample population is given a beeper-like device to wear all day and it picks up the radio stations they listen to and this is how stations are rated.

Why do radio stations play the same songs so much?

PPM, that’s why. They have to play the researched hits to keep people listening and not changing to competitor stations. This is how radio makes its money (ad dollars) the higher the rank the more they can bill.

There’s not enough new music out there…

That’s a complaint I have heard more times than I care to remember. The truth is there is a TON of new music out there. The record labels produce it all the time.

Independent artists produce it all the time. And for the longest time neither had an outlet because radio wasn’t playing them, then came streaming.

Below is a chart of what people search for online when it comes to new music discovery. This chart was created by Radio Facts via Ubersuggest.com in July 2021. 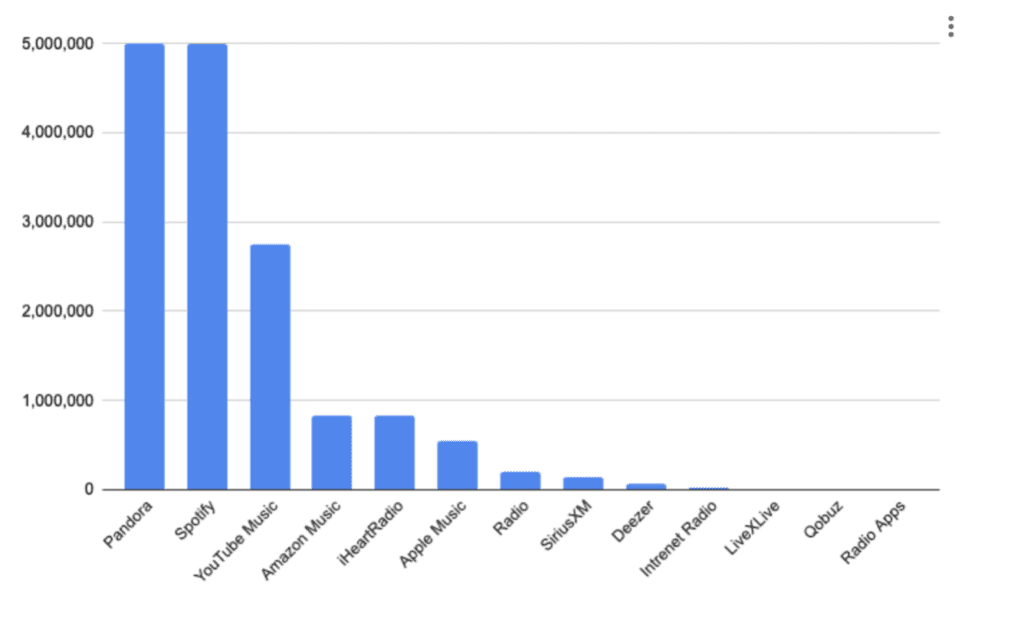 Spotify, Pandora, and YouTube Music dominate and listeners now have options where they don’t have to depend on the radio anymore and don’t have to hear the same songs over and over.

They can create their own playlists and hear their favorite songs any way they want.

You would think this would be a signal for radio to make a change to the music playlists and to add more songs. Unfortunately, it’s not.

PPM is still dominating the radio industry and if they want the revenue they have to play familiar songs. So radio is pretty much stuck when it comes to the music so they are forced to think of ways to keep listeners engaged in other ways which is becoming more and more challenging.

What will happen to radio?

In talking to contacts at the record labels and other entities radio is no longer the behemoth it once was, it’s still important but instead of being THE outlet, it’s now one of the outlets.

Some labels are making over a million dollars a day with music streaming. Radio can not compete with that and with more outlets and apps appearing online at a rapid pace, the outlook does not look good.

Make no mistake, corporations are doing their best to prepare for the future. As I stated earlier iHeart is a multi-media company that has bought up a very large percentage of the bigger podcast companies to have more to offer to their advertisers in the form of content.

Radio One is working on owning a huge gambling Casino in Richmond VA which they have pretty much been approved for and Entercom recently changed their name to Audacy to also be more of a media corporation instead of just a radio outlet.

Radio corporations are seeing less and less value in being called “Radio” and they are multiplying their positions to captivate a wider broadcast reach.

The radio DJs are the only ones who are in a bad position if they are playing a game and wait and see instead of looking at other ways to monetize or leverage what they do or have done.

Radio will never be off the air but there’s a very good chance it will change drastically over the next couple of years.

Stations in certain markets like Atlanta continue to do well even with massive competition amongst black music stations. As long as people drive to work and drive home the two most important shifts will continue to dominate (mornings and afternoons).

The future of radio will be prosperous as long as the corporations expand their abilities to reach listeners and consumers but just doing radio may not be enough at this point.