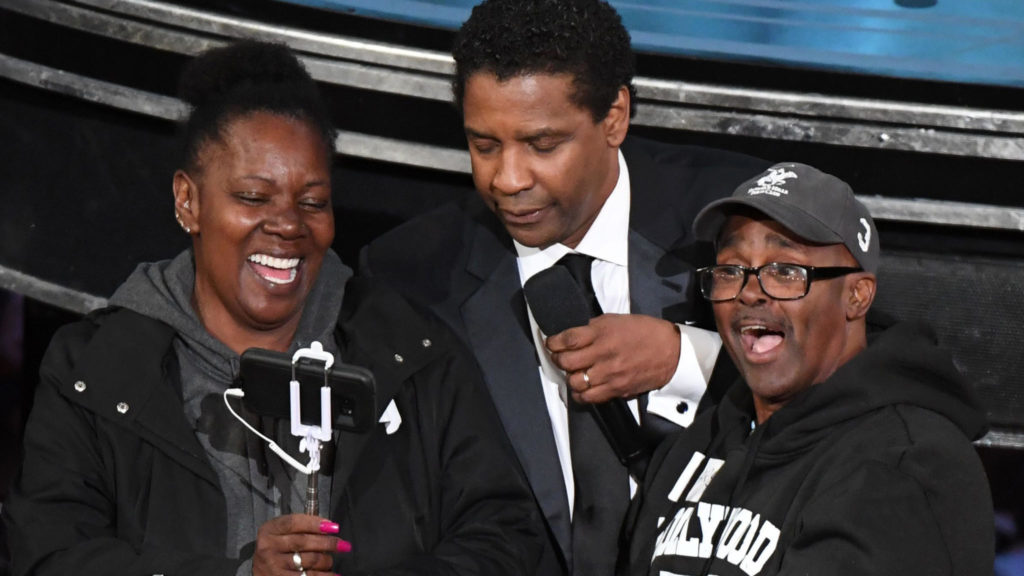 If you have been sleeping under a rock then you may not know about the sensation from last night’s Oscar named Gary from Chicago.   Jimmy Kimmel pulled off an epic prank as he had a few unassuming tour bus patrons enter the Oscars.  They looks on their faces were priceless as they thought they were just going to see a few Hollywood gowns and dresses as part of the tour.  I’m sure Jimmy thought the prank would go well but nobody was ready for Gary from Chicago.  This man absolutely stole the show as he and his fiance Vicky let the world now they are getting married in July 18th.  Gary was out there kissing hands, taking selfies, having celebrities hold his phone, getting fake married by Denzel all while “ignoring the white celebrities.”  LOL!

It was all in fun but in Hollywood, especially int he social media era, fifteen minutes of fame is so real.  #GaryFromChicago was trending strongly via twitter for about 30 minutes. Not only that, Gary is winning right now as he and Vicky are receiving all sort of offers and love. The couple has been offered complimentary gifts, wedding planning, tickets, photography, etc. Of course these are businesses looking to capitalize off the moment but it’s still all love. Peep some of the tweets below.

Gary from Chicago! We’ve got you covered if you want to come to a game! #Oscars

As the Internet is taking a knee for Vicky & #GaryFromChicago, we’d like to offer some complimentary gifts on us. #SayYes #HelpUsFindGandV pic.twitter.com/BeLzK9zcbr

Dear God, I want to come back as #garyfromchicago , shorts and all. #Oscars @jimmykimmel

Chicago is everywhere. Even on the #OSCARS Way to represent Gary Alan Cole and fiance’ Vickie #V103

I don’t want to just be happy. I want to be #GaryFromChicago level of happy.