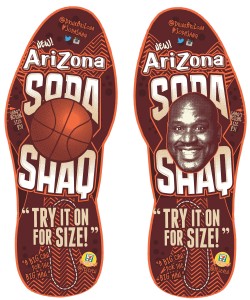 Sometimes I wish I was a celebrity just for the endorsement deals. Let’s add another celebrity endorsement as Shaq has partnered with 7-Eleven and Arizona beverages.Big can, big flavor, big news … what else would you expect when one of pro-basketball‘s biggest stars (literally and otherwise) Shaquille O’Neal gets his own soda namesake ““ Soda Shaq. 7-Eleven, Inc. announces today the national rollout of AriZona Beverages’ new, all-natural line of cream sodas, now chilling at participating 7-Eleven ® stores nationwide.Appropriately, the country’s largest convenience retailer is one of the few places in the country to get the 7-foot-1-inch big man’s Soda Shaq beverages throughout the summer. AriZona Beverages, known for big cans and big value, makes the partnership with the basketball icon a perfect three-way fit.When Shaq tease-tweeted last month about teaming up with AriZona Beverages to create a line of cream soda drinks, his favorite soft drink as a child, the response was, well, huge ““ just like the big man himself. As fans tweeted and re-tweeted, the question on everyone’s lips ““ “Where can I get me some of that?”With huge social media followings on Twitter and Instagram, AriZona (@DrinkAriZona), Shaquille O’Neal (@SHAQ) and 7-Eleven (@7eleven) have reached an audience of almost 17 million fans who are now eager to get their hands on Soda Shaq.The Soda Shaq Cream Soda line comes in four flavors including Vanilla, Blueberry, Strawberry and Orange. Soda Shaq contains no artificial flavors, colors or preservatives. Made with real Madagascar Bourbon Vanilla extract and pure cane sugar at only 90 calories per serving, Soda Shaq is putting up some serious defense against competitors. Fans can satisfy their sweet tooth without the guilt from the very first clean and refreshing sip.In addition to the new cream sodas, big things are afoot at 7-Eleven stores. Actually, big feet are afoot. 7-Eleven and AriZona invite fans to be on the look out for a decal of Shaq’s giant shoes in participating 7-Eleven stores across the country.Customers are encouraged to “Try it on for Size” by placing their feet inside the MVP’s Size 23 tracks, shooting a photo and uploading their photo with Shaq’s decal on Twitter or Instagram using @drinkarizona and #sodashaq for a chance to win some sweet Shaq swag. Winners will be announced weekly over a 10-week period. Visit www.DrinkSodaShaq.com for details.”If we’re not thinking out of the box every day, someone’s going to beat us,” said AriZona Chairman Don Vultaggio, “which is why AriZona and 7-Eleven are inviting fans to step out of the box and into Shaq’s shoes. Anyone interested in seeing if they can fill the big man’s Size 23 shoes should step up to the line.””We like to do things big at 7-Eleven, and you can’t get any bigger than Shaq who’s not only a giant in stature, but also in personality and popularity,” said Jesus Delgado-Jenkins, 7-Eleven executive vice president for merchandising, marketing, innovation and logistics. “We’ve scored big as the only convenience store and one of very few retailers to introduce these new sodas. But stay tuned. We have some other big Soda Shaq-centric offers coming up later this summer.”Soda Shaq is easily identifiable with a big, bold can design featuring the many moods of the basketball giant in true Shaq-a-licious form. Each flavor comes in a vibrantly colored container, sporting one of eight Shaq expressions ranging from professional to playful. The Soda Shaq line is available in 23.5-ounce cans at a suggested retail price of 99 cents per can.