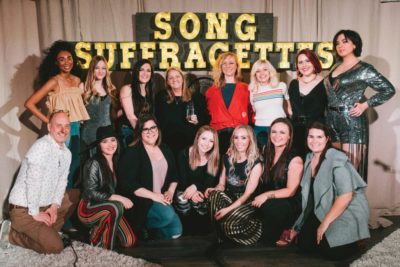 Yesterday at an invite-only reception at The Listening Room Café, Song Suffragettes announced that The LSSW Group at J.P. Morgan Securities would be the first-ever presenting sponsor for the all-female, singer-songwriter collective. Based in New York City, the four women partners of The LSSW Group serve the wealth management and investment needs of the entertainment industry.Says Eden Lopez, partner in The LSSW Group, “during a recent business trip to Nashville, we attended a Song Suffragettes show and were blown away both by the talent on the stage and by the mission of Song Suffragettes. As a female-led team, we immediately knew we wanted to support and help expand the Song Suffragettes’ objective to ‘let the girls play’.”“Song Suffragettes hit the five-year mark this year and given the continued success of the show, we’ve been looking for sponsors to assist as we grow our all-female performance brand,” says Todd Cassetty, founder of Song Suffragettes. “After meeting Eden Lopez, Leslie Schwartz, Paula Steinberg and Liz Weikes, working with The LSSW Group made perfect sense. This relationship will help us evolve new female-centric initiatives, and it is the glowing definition of women supporting women.”Attended by long-time Music Row stalwarts, the reception treated guests to cocktails, hors d’oeuvres and introduced them to many of the Song Suffragettes’ performers in attendance while remarks were made by both Eden Lopez and Todd Cassetty. Immediately following the reception, guests were treated to a sold-out Song Suffragettes show by recurring performers Kalie Shorr, Candi Carpenter, Kasey Tyndall and by first-timers Ashley Elle and British-resident Kaity Rae.