Radio Facts: NEW SEASON OF “IYANLA: FIX MY LIFE” PREMIERES SATURDAY, SEPTEMBER 10 AT 9:00 PM ET/PT ON OWN: OPRAH WINFREY NETWORK
Award-winning Series Launches with Four-Part “House of Healing” Episode Tackling the Myth of the “Angry Black Woman”
Future Episodes Delve into a Father Who Abandons his Family and a Powerball Winner in Danger of Losing her Fortune 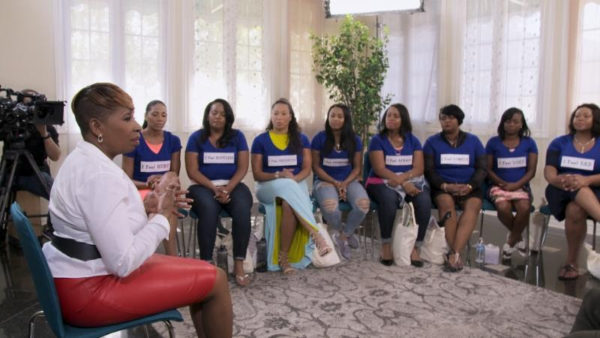 Iyanla Vanzant sits with eight women to tackle the myth of the “Angry Black Women” in new season of “Iyanla: Fix My Life”
Photo Courtesy of OWN
(LOS ANGELES, CA) – AUGUST 23, 2016 – An all-new season of OWN’s award-winning series “Iyanla: Fix My Life” will return with an emotional four-part, multi-week episode when spiritual life coach Iyanla Vanzant invites eight women to move into a “House of Healing” to dispel the myth of the “Angry Black Woman” and address the misperceptions sometimes associated with African American women, their behavior and ultimately their cultural identity. “Iyanla: Fix My Life” premieres on Saturday, September 10 at 9:00 p.m. ET/PT on OWN: Oprah Winfrey Network.
Click here for a first look at the new season of “Iyanla: Fix My Life”: www.oprah.com/IyanlaReturns
In the four-part season premiere (airing Sept. 10, 17, 24 and Oct. 1 at 10 p.m. ET/PT each week), Iyanla aims to prove that the “Angry Black Woman” stereotype is inaccurate, untrue and dangerous. The women, who struggle with abusive pasts and abandonment, are provided with the opportunity to be heard, as together with Iyanla, they examine their feelings and misguided pain in order to move past these underlying issues and create positive patterns of communication.
Later in the season, Iyanla travels to Atlanta to visit the Henry family as they deal with a father who is often not present, leaving the family for days at a time. While he is gone, his wife is aware her husband is likely involved in drugs and sex. Iyanla works with the couple and their daughters to explore the effects of childhood wounds, silent agreements and codependency.
Iyanla also works with Powerball winner Marie Holmes. After winning 188 million dollars and overwhelmed by the pressures of her fortune, life for the mother of four has been in complete shambles. Adding to the pressure is Marie’s fiancé, Lamar. After multiple arrests, Marie has spent more than 20 million dollars to bail Lamar out of jail. With Lamar’s 10-year sentence just 48 hours away, Iyanla visits Marie’s palatial estate to help Marie cope with her new fortune before she loses it all.
Iyanla also returns to the “House of Healing” in future episodes with six African American men struggling with broken spirits and broken hearts. The men-which include a man attempting to build a life for himself after numerous stints in jail to a former singer who struggles with feelings of abandonment to a father looking to mend a relationship with his famous socialite daughter-are struggling with their identities due to the effects of feeling criminalized, dehumanized and victimized by society. In three groundbreaking episodes, Iyanla will explore each man’s story and reject the narrow parameters society uses to define manhood, and to also help each define themselves in ways that honor their strengths, culture and relationship to society.
“Iyanla: Fix My Life” is produced by PIGEON for OWN with executive producers Paul Harrison (“Welcome to Sweetie Pie’s”) and Iyanla Vanzant.
Iyana Vanzant Biography
Iyanla Vanzant is the host and executive producer of Oprah Winfrey Network’s critically acclaimed and award-winning series “Iyanla, Fix My Life.” She is a mother, survivor, spiritual life coach, empowerment orator, minister, two-time NAACP Image Award winner and six-time New York Times bestselling author whose focus on faith, personal development and loving relationships has captivated and inspired audiences around the world. In addition, Iyanla is also a regular contributor to O, The Oprah Magazine and has been featured in numerous publications as well as on the cover of Essence magazine. A prolific writer, she has published seventeen books that have been translated into 23 languages and sold millions of copies. Her most recent book is “Forgiveness: 21 Days to Forgive Everyone for Everything.” When not writing or appearing on television, Iyanla lectures and facilitates workshops nationally and internationally. With her no-nonsense approach and underlying message of, “live better by loving yourself,” Iyanla has ignited a universal spark of self-discovery.
ABOUT OWN: OPRAH WINFREY NETWORK:
OWN: Oprah Winfrey Network is the first and only network named for, and inspired by, a single iconic leader. Oprah Winfrey’s heart and creative instincts inform the brand – and the magnetism of the channel. Winfrey provides leadership in programming and attracts superstar talent to join her in primetime, building a global community of like-minded viewers and leading that community to connect on social media and beyond. OWN is a singular destination on cable. Depth with edge. Heart. Star power. Connection. And endless possibilities. OWN is a joint venture between Harpo, Inc. and Discovery Communications. The network debuted on January 1, 2011 and is available in 85 million homes. The venture also includes the award-winning digital platform Oprah.com.