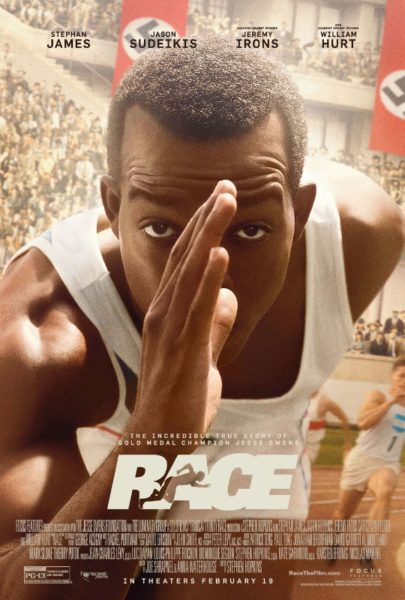 MPAA-rated “PG-13,” RACE stars actor Stephan James as Jesse Owens, and will be released nationwide by Focus Features on February 19. (PRNewsFoto/McDonald’s USA, LLC)Beginning February 16, McDonald’s will bring exclusive preview screenings of Focus Features’ RACE, the long-awaited movie about gold medal champion Jesse Owens, to five theaters across the country. In conjunction with local McDonald’s franchisees and community partners, the movie will receive exclusive screenings in Dallas, Detroit, Los Angeles, New York and Miami where audiences can experience the excitement of an American icon.Based on the true story of Owens, the legendary athlete who goes on a quest to become the greatest track and field competitor in history and thrusts him onto the world stage of the 1936 Olympics, RACE is film about courage, determination, tolerance and friendship, and an inspiring drama about one man’s fight to become an Olympic legend. MPAA-rated “PG-13,” RACE stars actor Stephan James as Jesse Owens, and will be released nationwide by Focus Features on February 19.”RACE is an amazing portrayal of the courage, tenacity and achievement that exist in African American communities throughout this country,” said William Rhodes, marketing director, McDonald’s USA. ”We are proud to provide viewing opportunities of this inspiring film.”In addition to the screening, McDonald’s is giving more than 70,000 loyal customers a special edition RACE 12-month “I Am Jesse Owens” mural calendar. Focus Features selected community organizations and youth educational programs in 12 markets to create a mural honoring the legacy of Jesse Owens. Appropriately titled, the mural efforts provided an opportunity for the youth to learn about the legendary Olympic gold medalist. Calendars will be available in participating restaurants, where the film is being screened in addition to Chicago and Houston, beginning the week of February 15.”We are excited that McDonald’s has made a collage calendar of all the wonderful RACE murals that were created in celebration of our dad’s legacy,” said two of Jesse Owens’ daughters, Marlene Owens Rankin and Gloria Owens Hemphill.McDonald’s is proud to partner with Focus Features and its movie RACE in its 365Black initiative. McDonald’s 365Black platform was created to celebrate the pride, heritage and achievements of African-Americans year round. Be sure to follow @365Black on Twitter and follow the conversation using #LikeJesse.About McDonald’s

A. Scott Galloway - November 24, 2020 0
Digital and Radio Facts: The magic of Christmas music is all about songs connected to your memories, feelings and beliefs about the holidays.I am sharing my list (after checking it twice…but in no particular order) as a jumping off point to spark thoughts about what your list might look like…and I would love to read it. I purposefully left off some obvious ones as I wouldn’t be telling you about something you already knew. I also left off the “naughty” ones…cuz I really need St.