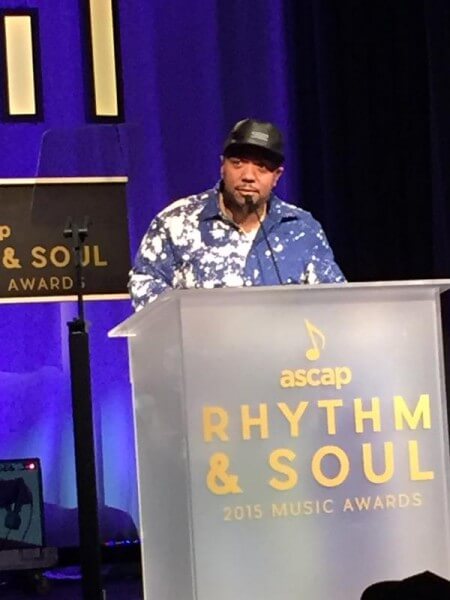 When it comes to events, ASCAP does it right. They always pick a great venue, a-listers are always on the scene, and every artists seems to shine in their moment. Last night they hosted their 28th annual Rhythm & Soul Music Awards at The Beverly Wilshire Hotel in Los Angeles. The invitation-only event paid special tribute to Lauryn Hill, who also performed a medley of her hits during the evening. Just for the record, she did her thing! I know Lauryn has received some bad press and reviews at some of her shows but last night was all about honoring the legend.  In fact, I would argue that The Miseducation of Lauryn Hill is one of the best albums of all time but we will save that debate for another day.
Now back to the lecture at hand- ASCAP also honored the songwriters and publishers of the most performed ASCAP songs on the 2014 R&B, hip-hop, rap and gospel charts.
During the ceremony, Hill was presented with the ASCAP Golden Note Award. The award is among the most prestigious honors that ASCAP gives to songwriters, composers and artists who have achieved extraordinary career milestones. Past recipients include: Pharrell Williams, Dr. Dre, Alicia Keys, Sean “Diddy” Combs, Jeff Lynne, Reba McEntire, LL Cool J, Jermaine Dupri, Jay Z, Lionel Richie, Stevie Wonder, Kenny Rogers, Quincy Jones, Elton John, Tom Petty and many more.
The Publisher of the Year Award went to Sony/ATV Tunes LLC. Songwriter of the Year went to co-winners Timbaland and Jay Z. Timbaland, Beyoncé and Jay Z also received the award for Top R&B/Hip-Hop Song for “Drunk in Love.” Kid Ink and co-writer Jeremih walked away with the Top Rap Song for “Show Me” featuring Chris Brown; while Bart Millard was honored with the award for Top Gospel Song for “I Can Only Imagine,” (performed by Tamela Mann).
D.R.A.M. performed his up-and-coming song and Beyoncé favorite, “Cha Cha;” while Jazmine Sullivan did a powerful version of her ballad “Forever Don’t Last.” The evening also featured Migos performing their popular “Handsome and Wealthy,” and gospel star Smokie Norful with his hit, “No Greater Love.”
There were several celebrities on hand for the epic night, which included Melanie Fiona, Timbaland, Jeremih, Tina Campbell, Kelly Price, Michelle Williams, Cheryl Fortune, BJ The Chicago Kid and more.  Check out a small clip of Lauryn doing her thing last night!