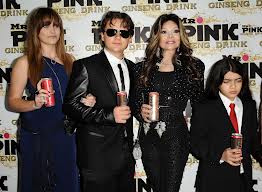 Uuuum, apparently LaToya Jackson has a talent agency by the name of Ja-Tail Enterprises and apparently she has signed all three of her late brother Michael’s kids Prince, 16, Paris, 15, and Blanket, 10 to that agency. She will reportedly take 15% of their royalties, which is a standard management agreement.MU’s kids are the agency’s only signees so far, but it seems as if LaToya is off to a good start. She has already helped Prince get his gig as Entertainment Tonight’s special correspondent last week, and an appearance on the CW’s remake of “Beverly Hills 90210.” Paris will be featured in the movie Lundon’s Bridge and the Three Keys scheduled to begin filming later this year.LaToya also has a reality show which is still in the bidding process with Oprah Winfrey’s, OWN Network currently bidding the most with $10 million. We will see what happens with this but if this is what the kids want then why not let them pursue their dreams. What do you think?