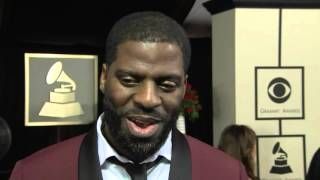 Kanye must be a marketing genius. I say this because he didn’t perform at the Grammys; he didn’t present at the Grammys; and he didn’t even show up to the Grammys yet he was talked about at the Grammys by several people. Whether it was Taylor Swift’s not so subliminal shade she was throwing at Kanye West for his controversial lyrics where he mentions her by name and indicates he made her famous or the Associated Press asking Kirk Franklin and Rhymefest about working with Kanye, Mr. West was still relevant at the Grammys.
Rhymefest recently made a few comments via Twitter saying that Kanye needs help so of course he was asked about it on the red carpet.  Rhymefest co-wrote “Jesus Walks” and won a Grammy yesterday for his writing on the song “Glory.”  The Chicago native basically said that he didn’t want to be a part of the population that is here to tear Kanye down but he still wanted him to be healthy and successful. Kirk Franklin was recently questioned for working with Ye so he addressed the critics that had a problem with his choice. Check out the clip below to see what else Rhymefest and Kirk Franklin had to say about Kanye.