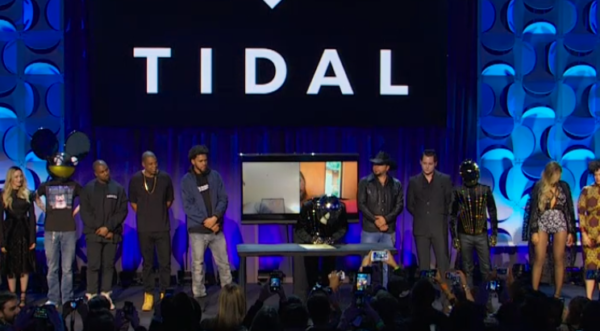 Why is anyone surprised that Apple is in negotiations with TIDAL? While there may be more to the deal behind the scenes, Apple music wants to be Number One at ALL costs. Just this week there was a report that Spotify’s attorney sent a letter to Apple about the company monopolizing their music service and hurting competitors by threatening to not offer the app for Spotify in the app store if Spotify doesn’t comply with Apple’s rules which could hinder their growth. Time will tell where that one goes.Now the behemoth is in talks with Jay Z’s TIDAL to take over the reigns. TIDAL has been around for a while but it exploded when Jay Z invested in the company and put his face on the brand with a superstar launch and a unique business model that appealed to artists who often feel they have been short changed when it comes to both streaming and terrestrial revenue when they music is played. While the $19.99 service fee was seen as excessive to competitors, music sites and even users, Jay Z offered something the other music services could not…

Jay Z used what business owners should be using more of in negotiating their positions and deals to sell their business services (especially African Americans within their cultural creative because more often than not we GIVE it away instead of selling it). LEVERAGE. What is leverage? It’s what I’m using right now by posting this story on my site then posting links on all the social networks to lead you back to my site. It’s taking the credit and reaping the benefits for YOUR knowledge, background, connections, affiliations and your work. This is exactly what Jay Z did with TIDAL.Another exle that we can learn from Jay Z’s acumen in business is the importance of getting in and getting out as an entrepreneur. Not all business is long term and to create wealth you either have to create ancillary product from the original brand or you sell the whole company. No matter what you do in business you will eventually grow bored with it so you have to know when to seize great opportunities. To that end in Jay Z’s case, he used his leverage with TIDAL in these ways…

… to create a divine experience for TIDAL users by getting EXCLUSIVES from peers and offering them more money for their participation and buyers a greater exclusive experience to songs and footage AND giving back to the artist community by offering at least 20 major artists a piece of the company as stakeholders. Quadrupling branding with multiple sources from various music industry genres that extend Jay Z’s reach.  Apple is a business, Jay Z is a businessman AND an artist who has personal relationships with other artists. He’s a step ahead of Apple because his reach extends the bottom line and he used it to his advantage to create a great business model.  Apple was left in the dust and they don’t like that and they were probably sitting back and waiting for TIDAL to fail with the monthly price that was higher than their own but it didn’t happen. TIDAL was too powerful and supported by too many major artists and Apple has already missed too many exclusives. They d0n’t want to miss any more.

Now Apple is using their greatest leverage… MONEY and Brand Recognition to get back in and maintain the top spot across the board. Jay Z stands to make a ridiculous amount of money from the deal along with the artist stakeholders. By the time he introduced the service in the way that he did, Apple should have immediately jumped on board and did something similar but it was too late. We will know in the coming week what the end result will be but I predict it will go through.