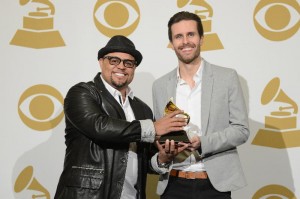 Released amidst international acclaim in August of last year and launching to the top of multiple retail sales charts, Israel and New Breed’s Jesus At The Center received a GRAMMY Award yesterday from The Recording Academyduring the 55th Annual GRAMMY Awards ®, which were broadcast live from Staples Center in Los Angeles on the CBS Television Network. Receiving an award for Best Contemporary Christian Music Song for the hit AC radio single from the album, “Your Presence Is Heaven” (a tie with Matt Redman’s “10,000 Reasons (Bless The Lord),”), the latter nod marks Israel Houghton’s first award in the category and fifth GRAMMY so far for the celebrated recording artist. Houghton shares the GRAMMY with “Your Presence Is Heaven” co-writer, Micah Massey.

Jesus At The Center, which was also nominated for a Best Gospel Album GRAMMY, marks Houghton’s returnwith New Breed after two successful solo projects for the first live recording in five years from Israel & New Breed. The album is a joint venture by Integrity Music and RGM-NEW BREED Music, and was recorded live over four days in front of more than 29,000 worshippers at Houston’s Lakewood Church. The Jesus At The Center double-CD, 18-song album with three additional studio singles features Israel & New Breed returning to their roots, delivering new anthems for the modern day church. The album further became Israel’s fifth consecutive Billboard Top 200-selling album, gathering praise from fans and critics alike.

In addition to the GRAMMY nominations, Houghton was recently tapped by the 28th Annual Stellar Gospel Music Awards to perform at their annual awards ceremony. Houghton sang his No. 1 Gospel hit single, “It’s Not Over (When God Is In It)” from Jesus At The Center. To see his compelling performance that aired live on GMC TV, go to https://www.youtube.com/watch?v=KoDF1eUSYqs.

May 2013 South Africa Tour dates to be announced

For all the last tour dates and news, go to www.newbreedmu