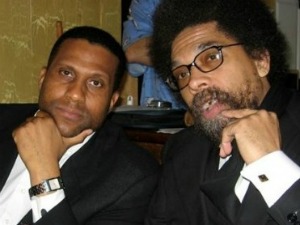 I’ve been researching Tavis Smiley and Cornel West for over five years, and in that time I’ve written nearly thirty articles on those two, because I thought it was important to the Black community. In response, one diehard Smiley and West supporter said, “You haven’t presented any substantive criticism of Cornel West. You’ve just hypothesized about his motives.” So I thought that I’d take a moment to accommodate him by giving my final take, and then closing the books on these two – providing they don’t do or say anything else stupid. I know, it’s wishful thinking. But, in any event, here’s my take on these two:.Cornel West is one of the primary reasons the country is in the fix that it’s in. The Black community was doing pretty well under Clinton. Then during the 2000 election Ralph Nader and Cornel West teamed up and got Bush elected..Clinton’s vice President, Al Gore, lost the 2000 election to Bush in Florida by 537 votes, and the Nader/West coalition peeled off 97,488 votes from Gore in Florida alone. So, again, West is one of the big reasons that the Black community is in the shape that it’s in today. Under Bush, the country was hemorrhaging 850,000 jobs a month. So by criticizing Obama about the condition of the country, Cornel West is like a guy who walks into a restaurant and shits on the floor, and then calls the Health Department because the owner can’t get it up fast enough.. 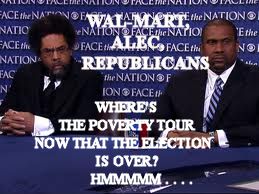 And please keep this in mind – the worse the Black community is doing, the more money that Tavis and West makes talking about it, because Tavis owns a publishing company where he and West write books about it, a production company, where he and West do televisions shows about it, and he owns a speakers bureau, where Cornel West makes $30,000 a speech just to talk about Black misery..And isn’t it funny that Tavis and West seem to Talk about everything bad that’s happening to the Black community, EXCEPT, Tavis’ part in the Wells Fargo “Ghetto Loan” scam where Tavis helped to herd over 30,000 Black and Hispanic homeowners into where they lost their homes AND their life savings? The Department of Justice said that it was the second biggest housing discrimination case on record:.”On July 12, 2012 Charlie Savage reported in the New York Times that Wells Fargo Bank agreed to pay $175 million to settle the discrimination suit which, according to the Department of Justice, targeted over 30,000 Black and Hispanic borrowers for subprime loans with a higher interest rate than for similarly situated White borrowers between 2004 and 2009.”.”Smiley was the keynote speaker, and the big draw, according to Boston [host of “Moneywise”] and Keith Corbett, executive vice president of the Center for Responsible Lending, who attended two of the seminars. Smiley would charge up the audience — and rattle the Wells Fargo executives in attendance — by launching into a story about how he hated banks, and how they used to refuse to lend him money for his real estate projects in Compton, Calif., and elsewhere… But what appeared on the surface as a way to help black borrowers build wealth was actually just the opposite, according to a little-noticed explanation of the “Wealth Building” seminar strategy, contained in a lawsuit recently filed by Illinois Attorney General Lisa Madigan.”.In Addition, People like Tavis Smiley, Cornel West, and Boyce Watkins are playing on the ignorance of the people. They’re going out of their way NOT to tell the Black community that the United States Constitution gives sole control of spending to the United States House of Representatives, which is controlled by the Republicans. So the only way that President Obama can spend any money to assist the Black community is to get the Republican House to go along with him..That’s why it’s so important for the president to hold together a coalition of Blacks, women, gays, Hispanics, and every other segment of the American population. He needs ALL of us to place pressure on the Republicans to loosen the purse strings in order for him to get (click “Next” for next page)anything done. So anytime you hear Tavis, West, or Watkins pointing their finger at what President Obama is doing for any other segment of the population, they’re doing you a disservice..Here’s how politics works – you support me when I need you, and I’ll support you when you need me. So whenever President Obama does anything for other segments of the population, he’s building up political capital so he can help you. But, he doesn’t discuss what he’s doing for the Black community for a very good reason – as Cornel says himself (when it’s convenient), “Race Matters.”.These gentlemen know full well that if President Obama runs around bragging about what he’s doing for the Black community, the Republicans are going to use that as leverage to tear his coalition apart. They would tell women, gays, Hispanics, and everyone else in America that Obama doesn’t care about them, all he wants to do is help his own people, and that message hurts the Black community. Don’t these so-called intellectuals recognize that? If they don’t, they’re dumb. If they do, that means that they’re purposely trying to mislead you. The question then, is why?.Take just a minute to ask yourself this one simple question – why aren’t they going after the Republicans?.While these two are hard at work trying to divide the Obama coalition, the Republicans are actively engaged in trying to obstruct the Black vote, obstruct all legislation that could possibly provide jobs in the Black community and America as a whole, they’re trying to circumvent the United States Constitution and women’s right to privacy by invading a woman’s uterus, they’re trying to obstruct the rights of gays, they’ve disenfranchised Michigan voters by firing duly elected officials and replacing them with handpicked cronies who are completely unaccountable to the people, and they’re applauding the murderer of an innocent and unarmed Black child. I could go on for pages, but I’m sure I’ve made my point. The GOP is, literally, the domestic enemy of the American people, and Tavis and West are fixated on Obama?!!!.With everything the Republican Party is doing to undermine the Black community, why would these two gentlemen be willing to defy the Black community – and risk destroying their careers in the process – to smear President Obama instead of going after the Republicans? There’s something not only problematic, but very suspicious about that. It just doesn’t make sense – at least, until you add the words of Raynard Jackson, a Black Republican activist, into the mix. Only then, do things begin to make more sense:

.
FROM THE MOUTH OF A BLACK REPUBLICAN ACTIVIST
. 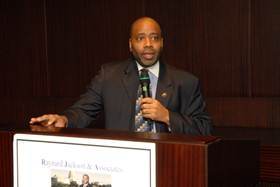 In his article, “My Republican Party has Abandoned Me,” Black Republican activist, Raynard Jackson, says the following:
.
“For many years, I have approached the party and its supporters about underwriting programs to bring together Blacks who are Republican or lean Republican so we can weave them into every facet of the party structure. The answer is always, No! But, twice this year some of these same people have approached me about funding for some election year tricks that they (White Republicans) have conjured up and simply need a Black face to execute the plan. On these two separate occasions, these funders were willing to spend upwards of $20 million to have me organize a national caign to identify Blacks who would be critical of President Obama.”.
Considering Tavis Smiley’s close association with Walmart, Exxon/Mobile, Wells Fargo, Nationwide Ins., and other ALEC-connected corporations, is he and Cornel West doing for free, what the Republican Party is willing to pay $20 million to have done? Hmmmmm . . . What do you think?
.
RELATED CONTENT
Poverty Pimp, Inc.https://wattree.blogspot.com/2013/01/poverty-pimp-inc.html
Eric L. Wattreehttps://wattree.blogspot.com/[email protected]Citizens Against Reckless Middle-Class Abuse (CARMA)

Has Someone You Know Committed PPP Fraud? Call The Breakfast Club!

The Moment Of Truth, The Derrick Chauvin Verdict Is In