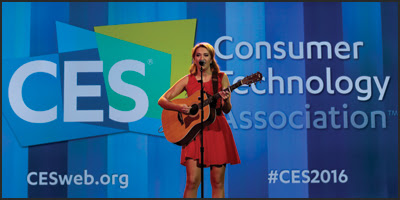 Building on the success of the inaugural CES® 2016 contest, the Consumer Technology Association (CTA)™ is once again hosting a contest for artists to have their music featured as the soundtrack for the CES® 2017 opening keynote video. The competition runs through September 1, 2016.
“Creative minds use consumer technology to shape and produce their art. Technology enables and enhances music, so we want to use our platform to help the career of a yet-to-be recognized musician,” said Gary Shapiro, president and CEO, Consumer Technology Association.
The winning individual or group will be publicly announced during CES Unveiled New York on November 10, 2016 and receive worldwide recognition as well as a $5,000 cash prize, a two-night stay in Las Vegas during CES 2017 and the opportunity to perform their winning song live on-stage prior to the opening keynote address. CES 2017 runs January 5-8, 2017 in Las Vegas, NV.
Eligible applications must be submitted by 11:59 PM EDT on Thursday, September 1, 2016 and meet the following criteria:
Music must be an original piece
Music must be at least 90 seconds in length
Any lyrics cannot be offensive
All genres of music are welcome
The individual or musical group submitting the music must own the rights to the music and be willing to license the music to CTA in perpetuity for use in the keynote opening video, online distribution and for promotion purposes
Individuals or groups submitting music must be 18 years old or have written permission from a legal guardian to submit the music
Individuals or groups submitting must be legal U.S. residents
Music submitted by stock or royalty free music suppliers WILL NOT be accepted
Since winning last year’s contest, Lexie Hayden’s song “When I’m With You” has been featured in sorority Alpha Delta Pi’s national philanthropy video. Lexie now lives in Nashville, Tennessee where she is working on new music and performing in the area. The previous keynote video can be found on CES.tech featuring the CES 2016 winner’s music. Questions should be directed to [email protected]