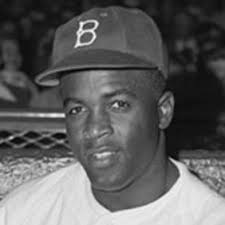 On April 15 every year, players across Major League Baseball wear the number 42 to honor the late Jackie Robinson, the man who broke baseball’s color barrier on that date in 1947. As part of that celebration, Bounce TV, the nation’s first-ever broadcast television network for African Americans, will honor the baseball legend by premiering The Jackie Robinson Story, starring Robinson himself, on the eve of Jackie Robinson Day, Sunday, April 14 at 10:00 pm ET. (Visit www.bouncetv.com for local Bounce TV channel locations.)Bounce TV’s exclusive presentation of the 1950 classic comes alongside the release of the new theatrical motion picture 42 starring Chadwick Boseman as Robinson and Harrison Ford as Branch Rickey.The Jackie Robinson Story chronicles Robinson’s life, from youth, through his college career at UCLA, his time in the Negro Leagues and his pioneering experiences and career with the Brooklyn Dodgers. The film explores Robinson’s struggle with racial injustice as he gradually wins over his peers, MLB leadership and the public with his character, talent and determination. Ruby Dee co-stars as Jackie’s wife, Rae Robinson.