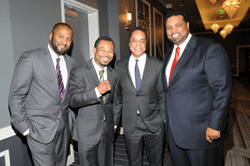 The Los Angeles Minority Business Development Agency (MBDA) has named Andre Farr its Innovative Entrepreneur of the Year for 2015. He is the inaugural recipient of this award, which celebrates innovative leadership that fosters global business expansion and job creation. André Farr will receive the award on Saturday April 18 during a Black Tie Awards Dinner that begins at 6:30 p.m. at Carnesale Commons on the University of California at Los Angeles campus.Farr is receiving this award for the strong commitment he has demonstrated during his 28-year career to creating opportunities for minorities in business. These efforts have also advanced economic growth in the United States and globally. Notable professionals he has worked with and/or mentored include MC Hammer, Beyoncé, Ray Lewis, Carmelo Anthony, Lisa Raye, Kellita Smith, JustNCase, Chris Spencer, Brian Dobbins, Halle Berry, Public Enemy, Floyd Mayweather, Shaquille O’Neal and “Sugar” Shane Mosely.In awarding Farr this honor, the MBDA likened him to Mayor Tom Bradley, Jackie Robinson and Dr. Tom Bunche; like Farr, all are one-time UCLA student athletes who went on to have “impressive careers of international entrepreneurial leadership.” Farr has long been recognized—both in the national media and with awards such as Entrepreneur of the Year, Sports Executive of the Year, 5 Most Powerful People in Sports and Top 50 Most Influential African Americans—for his creative and innovative entrepreneurial leadership and his long-standing passion for creating social enterprises.Among the honored guests at the awards dinner will be Bill Duffy, agent with BDA Sports Management, and David Hinson, CEO of Custom Cut Clothiers International and former National Director of the U.S. Department of Commerce Minority Business Development Agency.Farr currently serves as Chief Executive Officer of his namesake consultancy Andre Farr International, LLC, where he and a team develop branded sports and entertainment concepts as well as groundbreaking business ventures. Additionally, Farr heads two emergent non-profit organizations, City Youth Exposure and the Black Sports Academy, and he founded a third in 1996, the Black Sports Agents Association (BSAA), to bring together African-American sports agents and executives.Originally established as the Office of Minority Business Enterprise in 1969, the MBDA focuses on advancing global business, access to capital and access to contracts. It is instrumental in advancing the growth of minority-owned businesses—in 2014 alone MBDA helped clients obtain more than $6.74 billion in contracts and capital rewards.The Host Committee for this inaugural event includes Berky Nelson, PhD.; C.Z. Wilson, PhD.; and Alfred E. Osborne Jr., PhD. Dr. Nelson is a writer, historian and educator who published The Rise and Fall of Modern Black Leadership: Chronicle of a Twentieth Century Tragedy in 2003. Dr. Wilson is a modern day renaissance man who has made his mark in a diverse array of business, education and public service initiatives over the past 30 years. Dr. Osborne is the senior associate dean of UCLA Anderson and oversees several key areas and initiatives within the business school.Media are invited to pre-register and attend this event, which will feature UCLA luminaries from the worlds of business, sports and academics and aims to focus attention on exceptional achievement for minority entrepreneurs, business leaders and supporters of sustainable global economic growth of minority-owned businesses.

Digital and Radio Facts - January 16, 2021 0
Radio is just the BeginningThe time has come to wake up and take a good look at your career. Let's explore the good and the bad. Today, being a radio DJ is the START of a career.

ARBITRON'S CAROL EDWARDS APPOINTED TO THE BOARD OF DIRECTORS FOR THE...