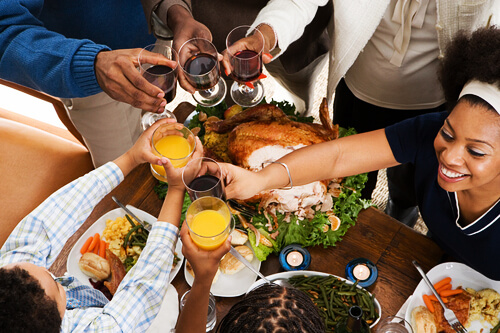 Thanksgiving is a great time of the year. What other holiday can you gorge like a bull and nobody will criticize you cause they are too?

For me, the holiday’s always remind me of how glad I am I left Radio when I did in 2000 but in reality, I should have left even before that. Thanksgiving, Christmas and New Years Eve were all days that I could count on being scheduled to work at an LA Radio Station at the worst times. For Thanksgiving, I would be scheduled to work 12 to 6pm and got the same hours for Christmas then for New Years Eve I was always scheduled to work from 6 to midnight. In situations like these it’s pretty evident that the PD doesn’t think much of you. In addition, I wasted a lot of time being on the air because I always did radio because I COULD do it, I never had the desire, love or the addiction for it that other Radio DJs have I was just good at it. This is why I have such great sympathy for people who have to work on the holidays.
If I was the Head of All Urban Radio I would rule that all Radio Station s automate for Thanksgiving, Christmas and New Years UNLESS employees volunteer at which point they should be offered TRIPLE pay. Why do DJs need to be on the air during the holidays? I would also rule that any PD MAKING a Radio DJ work would be sentenced to an old fashioned game of dodge ball where the Radio DJs get to use cans of cranberry sauce as the balls. You really want me to be on the air and entertain people when my family is getting drunk and stabbing each other over something that happened in 1982?
People fail to realize the irony and psychology behind radio, it is not what it seems. You are talking to hundreds of thousands of people while you are contained in a small airtight box, usually alone. When you think about it, it’s almost like you have lost yo damn mind and you are in a cell entertaining yourself like a psychopath, we just get paid for it but something is really wrong with that concept or is it also like taking a shower and signing in it. I’m gon needju to marinate on that (it’s actually pronounced Marinade but you know how the black community has it’s own language interpretation like “Who yew iya” translated “What is your name please?”)
If you have to work during Thanksgiving and Christmas, allow me to make your New Year’s Resolution for you…find another damn job.
Retail companies like K-Mart and Wal-Mart are crap companies. Making MOTHERS work on Thanksgiving…. REALLY? Who is supposed to cook, the 10-year-old twins? My son works in retail and he has to work on Thanksgiving and it pisses me off because I wanted him to be with his family for the day. To make matters worse they don’t tell the employees if they will be off until the last-minute screwing up EVERYBODY’s plans in the family in the process. What if you have people flying in or YOU plan on leaving town. Selfish shoppers can continue to wait until Friday to go crazy and spend the night at Wal-Mart for a damn TV (why in the hell do people do that? Why not just get another degree or a better job and get a HOUSE instead?) At any rate, as the holidays draw near I hope that you and your family have a safe and happy Thanksgiving.
K