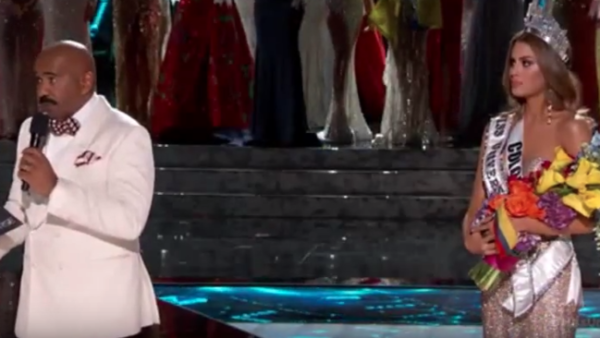 Let’s face it, he was probably a bag of nerves with an opportunity like this and things just happen but some things NEVER happen. Steve surrounds himself with the best people and you can best believe one of them told him to do the press conference.  Was the press conference taped this morning or last night? Not sure, looked like he was wearing the same hosting outfit. He has apologized and admits he did not feel his style was right for the show (but as someone else pointed out he still took that check) and the rest is history. This is the MOST humble and down to earth we have seen Steve Harvey in years (the press conference) and the incident had to be a harsh wake up call.
There is not enough apologizing unfortunately that can make that poor woman, Miss Colombia, feel better about being humiliated on international TV last night. No doubt, she has probably already checked in to the psych ward with her gown on and the imprint of the crown still in her wig.
No Sleep for Steve Harvey Last Night!
The Steve Harvey gargantuan mishap yesterday where he announced the WRONG winner for the Miss Universe pageant just made history for the show, for the winner, the fake winner and most important STEVE. How can he get up and do his radio show in the morning after this? He doesn’t have to if it’s running reruns. At least it’s the end of the year and he can start fresh with 2027. Ooops, I mean 2016 (lol). It says 2027 right her on the card y’all. I actually feel bad for Steve but you KNOW I still have to make my jokes about the situation. Hey we all have to laugh at ourselves, here are other titles I was going to use for the story:
“Did Steve Harvey have too much Hardwood Smoke” (from his Wal-Mart Bacon)
“Miss(ed) Universe”
“Merry April Fools!”
“Oops upside Yo Head, I said Oops Upside YO Head”
“Well I AM a Comedian! Y’all don’t think this is funny?”
“She was Actually Waving GOODBYE!”
“Move Btch Get out da way”
“Act like a Winner, Think again”
“Act like a Pro Radio DJ, Think again”
OK one more… “Family Fooled”
I’m really going to try to do a straight story here with no more jokes but where is a TRUE trained urban Radio DJ when you need one to host a show like this?
Did you see the look on that woman’s face after her parade wave and tears were interrupted by Steve telling the whole world she did NOT win? She looked at Steve like ‘You no good countray black motha f… ‘ Thanks to Steve she too will be haunted with this memory for the rest of her life and on INTERNATIONAL TV!!! Well we can look at the bright side, she WAS Miss Universe for about 2 minutes.  OK just one more paragraph…
Did you see how the reps on the show didn’t know WTF to do? They didn’t want to take the crown off Miss Colombia’s head in front of the world and even Miss Philippines was awkward and didn’t know how to celebrate, the whole damn thing was just weird. But most important listen to Steve say (in the vid below) “This was my mistake and I take full responsibility” he goes on to say “Please don’t hold it against the ladies?” What did they do wrong?
[flowplayer id=”169198″]