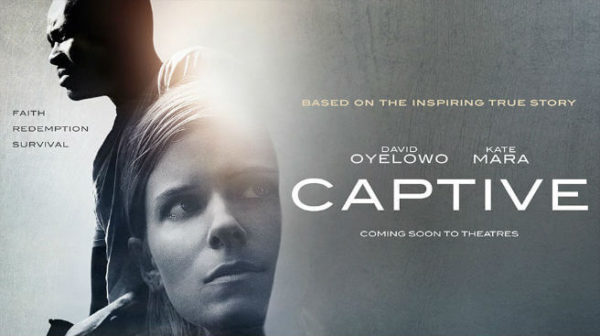 Paramount Pictures released today the first trailer for its upcoming film “CAPTIVE,” starring David Oyelowo (“SELMA,” “A MOST VIOLENT YEAR”) and Kate Mara (“FANTASTIC FOUR,” “House of Cards”). The film will open in theaters September 18th, 2015.
Based on the miraculous true story that drew the attention of the entire nation in 2005, “CAPTIVE” is a thrilling drama about the spiritual collision of two broken lives. When Brian Nichols – on the run as the subject of a city-wide manhunt and desperate to make contact with his newborn son – takes recovering meth addict Ashley Smith hostage in her own apartment, she turns for guidance to Rick Warren’s best-selling inspirational book, “The Purpose Driven Life.” While reading aloud, Ashley and her would-be killer each face crossroads where despair and death intersect hope.
Directed by veteran filmmaker Jerry Jameson, “CAPTIVE” is based on the book “Unlikely Angel” by Ashley Smith with Stacy Mattingly. The film’s screenplay is by Brian Bird.
In addition to Oyelowo and Mara, “CAPTIVE” also stars Leonor Varela, Jessica Oyelowo, with Mimi Rogers and Michael K. Williams.
The film was produced by Terry Botwick, Jerry Jameson, Lucas Akoskin, Alex Garcia, Katrina Wolfe, David Oyelowo and Ken Wales. The executive producers are Santiago Garcia Galván, Jonathan Gray, Brian Bird, Elliott Lester and Ralph Winter.
“In March of 2005, Ashley’s story captivated the nation on news outlets everywhere,” said Botwick. “Her story is thrilling and redemptive as God intersected the lives of two very broken people in the most dramatic way. It has been amazing getting to know Ashley and to be working with such fine actors. I am so pleased also to be partnering with Paramount to bring this authentic encounter to a worldwide audience.”