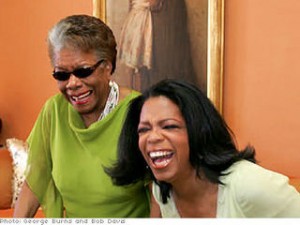 In the first of a special two-part event, Oprah Winfrey sits down with her beloved mentor and internationally acclaimed writer, author and poet Dr. Maya Angelou on the Emmy ® Award-winning series “Super Soul Sunday” premiering Mother’s Day, May 12 from 11 a.m.- 12:00 p.m. ET/PT on OWN: Oprah Winfrey Network.In this candid conversation, the luminary who Oprah calls her “˜mother-sister-friend’ opens up about forgiveness, family, and the rich relationship they’ve shared for more than thirty-five years. Discussing her latest book “Mom & Me & Mom,” Dr. Angelou delves into one of the deepest personal stories of her life: her relationship with her mother, Vivian Baxter. Dr. Angelou also reveals intimate stories from her childhood, including how her nurturing, yet fiery, mother challenged her to find strength in the face of adversity. Plus, find out how a few loving words from her mother changed young Maya’s life forever.A true Renaissance woman, Dr. Angelou has traveled the world, speaks seven languages, and is one of our greatest and most cherished poets. She has been a dancer, singer, artist, professor, director, and activist. Her most notable work, “I Know Why The Caged Bird Sings,” was recently named by TIME Magazine to be one of the “˜All-Time 100 Nonfiction Books.’ Now, with more than 30 bestselling titles and countless honors and awards, Dr. Angelou is hailed as one of the most renowned and influential voices of our time.This season’s “Super Soul Sunday” line-up continues with all-new inspirational episodes airing every Sunday (from 11:00-12:00p.m.) on OWN, including:May 19- “Oprah & Dr. Maya Angelou, Part Two”Oprah’s heart-to -heart conversation continues with acclaimed author, Dr. Maya Angelou. Discussing her latest book, Mom & Me & Mom, Dr. Angelou reveals how her tough, but tender-hearted mother transformed her life. Plus, she shares her insights on aging brilliantly, and how love can liberate you.May 26- “The Bigger Picture with Oprah, Rev Ed Bacon, Elizabeth Lesser & Mark Nepo”Join Oprah and three dynamic thought leaders for the first installment of “˜The Bigger Picture,’ a Super Soul Sunday panel discussion about today’s top global headlines, bringing unique and thoughtful perspective to world news topics ranging from prescription drugs to terrorism, gun violence, and our fascination with celebrity culture.June 2- “Oprah & Dr. Brian Weiss: Reincarnation, Past Lives and Miracles”Groundbreaking psychiatrist and best-selling author of “Many Lives, Many Masters” tells Oprah of how he came to practice past life regression therapy.June 9- “Oprah & Karen Armstrong, Part One”Former Roman Catholic nun and best-selling religious historian Karen Armstrong, who created TED’s Charter for Compassion, reveals her life story and why she is on a mission to build greater compassion in the world.June 16- “Oprah & Coach Phil Jackson”Widely considered one of the greatest American basketball coaches in history, 11 time NBA Championship coach Phil Jackson opens up to Oprah like you’ve never seen him before, talking about his strict upbringing, his coaching philosophy as it relates to life lessons and his battle with cancer.June 23- “Oprah & Grammy-Award Winner India.Arie: Spiritual Awakening”Grammy Award-winning musician and songstress India.Arie sits down with Oprah for a truly spiritual and heart-opening conversation where she reveals her downward spiral after being shut out of her first Grammy nominations. Arie talks about what was holding her back and how she broke through. Plus, Arie performs a very special song from her new album.June 30- “Oprah & Grammy-Award Winner India.Arie: How to Break Through”The India.Arie conversation continues as she addresses a recent controversy that landed her in the headlines. She explains her spiritual awakening in Hawaii, talks about love relationships and why she chose to trust her intuition.