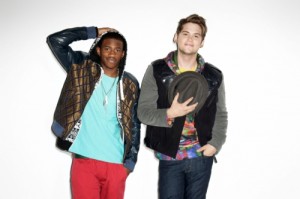 After watching the “Thank You” video from MKTO and really listening to the song, these youngsters are sending a powerful message to the generations before them. I really believe this songs captures the voice and attitude of today’s youth although its done in a fun lighthearted fashion. It’s like they are saying F*ck You for screwing the world up but were polite enough to say “Thank You” instead. Check it out for yourself.  MKTO, compromised of dynamic twosome Malcolm Kelley and Tony Oller, has officially signed with Columbia Records/M2V. The duo, whose name represents the group members’ combined initials, released its debut single, “Thank You,” today via all digital service providers. The group offers a vibrant mix of pop, hip-hop and R&B, crafted in an undeniably organic way. Both accomplished adolescent actors, (Oller’s credits include starring in the Disney Series As The Bells Rings as well as the movie Beneath The Darkness, while Kelley had major roles on ABC’s hit show LOST as well as in the film Antwone Fisher), the two first met while filming Gigantic, in 2010. Shortly thereafter they began making music together and caught the attention of powerhouse songwriters Emanuel Kiriakou and Evan Bogart (Beyonce, Rihanna, Ne-Yo, Jason DeRulo). The songwriting pair is now executive producing MKTO’s forthcoming debut album.On January 4 th, the band premiered their debut music video for “Thank You” on VEVO which garnered over 500,000 views within the first 48 hours, and nearly 1 million views in its first week. MKTO has been described by Seventeen Magazine as their “new music crush” and Entertainment Tonight has dubbed “Thank You” a “catchy debut single.” Celebuzz has declared it “the anthem for the underdogs,” but as the band’s following continues to grow, these “underdogs” are proving to be the popular ones.”Thank You” AVAILABLE NOW: www.smarturl.it/MKTO_ThankYouWATCH THE VIDEO HERE:

Kevin RossMay 20, 2021July 18, 2022
May 20, 2021July 18, 2022
FacebookTwitterInstagramYoutube
We use cookies on our website to give you the most relevant experience by remembering your preferences and repeat visits. By clicking “Accept”, you consent to the use of ALL the cookies.
Do not sell my personal information.
Cookie SettingsAccept
Manage consent