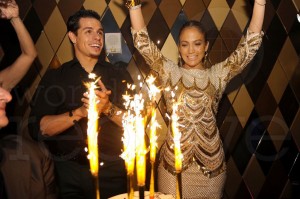 Artist Jennifer Lopez celebrated her Premios Juventud award and early birthday at WALL Miami lounge on Thursday, July 17 , joined by close friends including Pitbull, Casper Smart , Benny Medina, DjIrie and WALL Miami co-owners Karim Masri , Nicola Siervo , Navin Chatani and Jarred Grant . Revelers looked on as Lopez and a group of more than 40 personal guests enjoyed Belvedere cocktails and Moet rose in a roped off section of the popular boite. Later in the night, Pitbull dropped into the dj booth, grabbed the microphone and wished Lopez a happy birthday, drawing cheers from the capacity crowd. Lopez and crew partied into the early hours of the night, which marked the official start to Miami Swim Week. WALL Miami lounge, located inside the W South Beach hotel, celebrated its 4th Anniversary on Saturday, July 20, 2013 .

Since its opening, WALL has been a magnet for celebrities and jet setters. A-list clientele includes Matt Damon, Tom Cruise, Michael Douglas and Catherine Zeta-Jones, among others. WALL has hosted marquee events such as the official Swedish House Mafia “Masquerade Motel” after-party featuring Sebastian Ingrosso, Axwell and Steve Angello. Other critically acclaimed international DJs who have headlined at WALL include Afrojack, Seth Troxler, Pete Tong and Reboot.