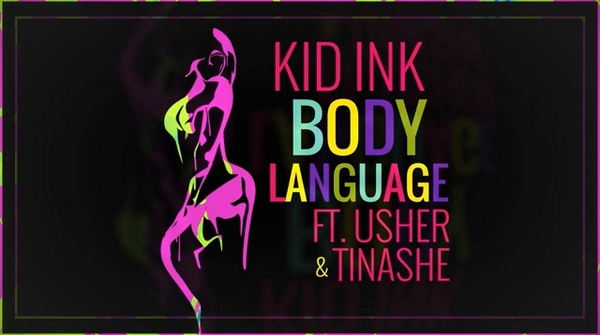 Chart-topping, multi-platinum selling hip-hop artist Kid Ink releases his brand new single “Body Language” featuring renowned Grammy Award winner Usher and burgeoning R&B superstar Tinashe. Produced by the Grammy Award winning team Stargate, along with Cashmere Cat, the bonafide club anthem is currently available at select digital music providers. The single will be featured on Ink’s forthcoming sophomore album, slated for release in 2015. “Body language is a lot louder than words and this song is going to mean a lot in the clubs where it’s so loud that you can’t do much talking,” explains Ink. “I’ve always had an interest in working with Usher from a fan standpoint and simply because he’s a legendary hitmaker. When I wrote the record I had in mind for it to be a conversation in a crowded room between two people so I needed female vocals and Tinashe was the first and perfect choice. I love working with true talent.” While “Body Language” begins to make its mark at radio and eventually to the top of the charts, Kid Ink is enjoying the success of his recently RIAA-certifications for the double-platinum sales of “Show Me” and gold sales of “Main Chick.” Both hit songs are featured on Kid Ink’s debut album My Own Lane. Released January 7th 2014 on Tha Alumni Music Group/88 Classic/RCA Records, My Own Lane entered at #1 on Billboard’s Rap Albums chart, #2 on Top R&B/Hip-Hop Albums chart and #3 on both the Top 200 and Top Digital Albums charts, according to Nielsen SoundScan. Since its release, My Own Lane has accrued worldwide TEA and album sales of over 500,000 while the videos for “Show Me” and “Main Chick” were viewed over 100 million times. Kid Ink continues his quest for global domination with his current “My Own Lane European Tour” through late-October. The 47 shows in 18 countries trek includes stops in Austria, France, Belgium, Spain, South Africa, Switzerland, Germany, Denmark and more.