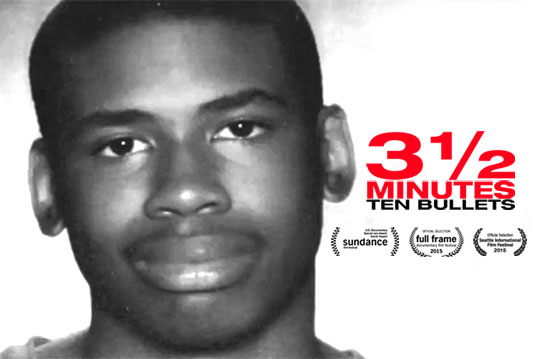 On Tuesday, November 17, hbo will host an invite-only screening event of its new film 3½ Minutes, Ten Bullets in New York City. The documentary probes the case of Jordan Davis, a black teenager, and Michael Dunn, a middle-aged white man, whose angry encounter over loud music outside a convenience store ended in the young man’s death when Dunn shot multiple times into the car where Davis was sitting. The film follows the journey of Jordan Davis’ parents from unimaginable loss to activism and explores public opinion on the issues of racial bias and self-defense in a state that has passed the “Stand Your Ground” law.
The evening will begin with an interactive experiential social media driven art installation. After the screening, Joshua Bennett, of New York-based poetry collective The Strivers Row, will perform an original spoken-word poem dedicated to Jordan Davis. University of Connecticut history professor and staff writer for The New Yorker Jelani Cobb will moderate a discussion with Davis’ parents, Ron Davis and Lucia McBath, as they share their personal experiences and journey since the trial.
3½ Minutes, Ten Bullets gives a voice to Jordan Davis’ story, his family and the countless stories like theirs that have happened across the country. The event is intended to spark dialogue amongst viewers and ignite awareness about racial bias across communities.
The film debuts on the three-year anniversary of the shooting. The event will take place at the historic Schomburg Center for Research in Black Culture in Harlem, New York.
3½ Minutes, Ten Bullets airs exclusively on hbo on Monday, November 23 at 9:00PM EST. For additional information about the documentary, visit, https://www.hbo.com/documentaries/3-1-2-minutes/index.html