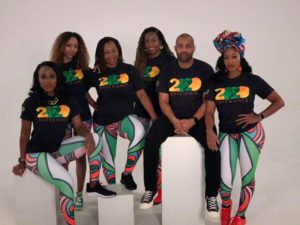 Some members of the FAMU Freshman Class of 2000.

The global pandemic deprived the Florida A&M University (FAMU) Freshman Class of 2000 of the opportunity to return to campus to celebrate their 20th reunion.

But members didn’t let that discourage them from showing their dedication to their alma mater. Three hundred and eleven donors raised $273,447.46 as part of the Freshman Class of 2000’s homecoming fundraising campaign.

That was the largest gift for an affinity class, said Brandi Tatum, assistant vice president in the Division of University Advancement.

“The Freshman Class of 2000 has raised the most money out of the affinity groups and this is very compelling because it was done during a pandemic,” Tatum said. “I’m exceptionally grateful to witness this dedication and commitment to FAMU, but I’m also proud and ecstatic because I’m a member of this class.”

During Homecoming 2019, the Freshman Class of 1999 raised $204,000. The success of that effort has spurred a friendly competition among the various cohorts. 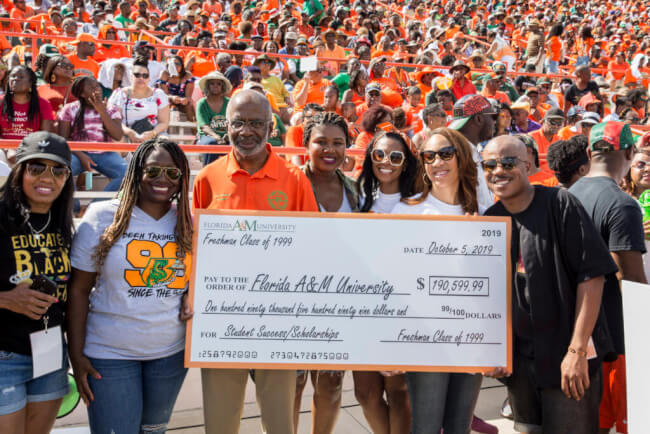 Roshell R. Rinkins, senior director of grants administration at the John S. & James L. Knight Foundation, served as the fundraising chair for the Freshman Class of 2000. Their goal was $250,000. When the pandemic hit, the urgency of their campaign became clear, Rinkins said.

“Now more than ever, FAMU needs us,” said Rinkins, who earned both undergraduate and graduate business administration degrees from the FAMU School of Business & Industry (SBI). “It feels really great to be able to make such a sizeable gift to FAMU, and to do it during a global pandemic further cements our continued commitment to the University.”

Getting more than 300 alumni, family and friends to contribute required  communication, creativity and teamwork. The class formed an executive team that reflected the diverse makeup of the class.

The group organized a town hall and invited Vice President of University Advancement Shawnta Friday-Stroud, Ph.D. During that event, Friday-Stroud, who is also the director of the FAMU Foundation and SBI dean, spoke about the areas the University could use the help – student success and unrestricted funds for scholarships.

Members also created a private Facebook page and a public Instagram page to share updates and to connect with the class during the campaign. Members set up a digital Rattler studio to host events, including a conversation with class member Ibram X. Kendi, Ph.D., the best-selling author of “How to be an Anti-Racist.” Class member Marcus Sandifer got his law firm, DLA Piper, to sponsor the event.

“This is the most critical time in our school’s history. Now, more than ever,  we have been called to produce the next generation of leaders, thinkers and achievers and FAMU cannot do it without the help of our alumni,” said Sandifer, an associate with DLA Piper in Fort Pierce, Fla. “It is more than about a class gift, it is to help secure the prosperity of FAMU’s greatest asset, and that is the great students it produces.”

The campaign received a major boost when the Knight Foundation offered a challenge grant to match donations dollar for dollar up to $50,000.

“That sparked great class engagement and amplified our efforts to push us closer to our goal,” Rinkins added. “We are proud that this is the largest class gift in the University’s history.”

While the COVID-19 pandemic disrupted plans for an on-campus FAMU Homecoming celebration, the University and others organized virtual events on Saturday, Oct. 24, the day originally scheduled for the canceled Homecoming parade and football game.

The events included Stroll to the Polls, a fundraising barbecue, a virtual tailgate party and a re-airing of the 2019 Homecoming Game against North Carolina Central University.

Among the highlights was the FAMU Marching 100 and the FAMU Concert Choir’s performance with Tye Tribbett for the virtual homecoming celebration “Meet Me on the Yard” on BET and YouTube.

FAMU alumna Natalie White and student Jade Fryer were honored during the two-night Essence and Pepsi “She Got Now” event.

The post FAMU Freshman Class of 2000 Donates Over $273,000 To Assist Students appeared first on FAMU Forward.