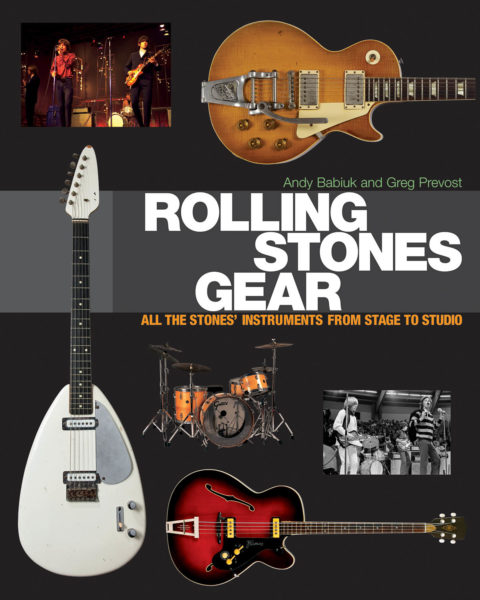 Coming in January 2014 from Backbeat Books, Rolling Stones Gear is the first book to historically document all of The Rolling Stones’ musical gear on their way to superstardom.Rolling Stones Gear not only covers the group’s personal background, but also every tour and studio session from their inception in 1962 to date, with detailed descriptions what instruments and equipment were used during these periods. Every song recorded by the band, including demos and outtakes are documented, with input from within the Stones’ ranks as well as from people who were involved with the band.Author Andy Babiuk was given exclusive access to The Rolling Stone’s musical equipment, and he has masterfully compiled the history of the band through the instruments they used for more than fifty years. “The book has taken nine years to finish and I thank The Rolling Stones as well as the hundreds of people who helped make this historic document possible,” says Babiuk about the 672 pages of lavishly illustrated research on The Rolling Stones. In 2001, he wrote the best-selling book Beatles Gear: All the Fab Four's Instruments from Stage to Studio, and Rolling Stones Gear is a worthy follower. A respected expert on vintage guitars and the foremost authority on the equipment used by The Rolling Stones, Babiuk is uniquely positioned to write this historic, first ever document on the iconic band that influenced and shaped rock ‘n roll and pop culture.The book boasts hundreds of photographs and rare images, many of which have never been published, including The Rolling Stones’ actual guitars and gear, specially photographed for this book and to be seen here for the first time. Virtually everyone – musicians, Stones fans, and casual readers alike – will learn amazing new facts about the band from their monumental fifty-year existence.

Roland Martin Says Black Media is Undervalued and Does Not Get...

Michelle Obama Admits to Depression Due to Pandemic and Racial Tension