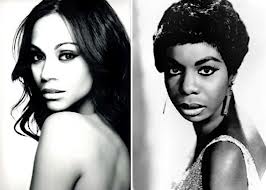 Hollywood actress, Zoe Saldana has finally responded to critics who have been outraged since it was announced that she would be replacing Mary J. Blige in the upcoming Nina Simone biopic.The initial controversy ignited over the fact that Nina Simone was a dark skinned woman with strong features, who was a champion of embracing her African-American features. Zoe Saldana is light skinned, with Puerto Rican and Dominican heritage. In an interview with HipHollywood at a pre-Oscar party, Saldana addressed the issue, “I guess what kept me from being hurt by the negative comments was that I’m doing it for my sistas and my brothas and I don’t care who tells me I’m not this or I’m not that, I know who I am and I know what Nina Simone means to me.””I did it all out of love for my people and my pride of being a black woman and a Latina woman and an American woman and that’s my truth,” Saldana said with conviction.What do you think of the idea to have Zoe Saldana play Nina Simone?S