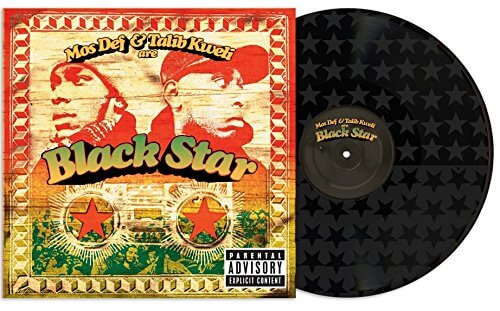 Universal Music Enterprises (UMe) continues its “Respect the Classics” tribute to many of hip-hop’s finest with the vinyl release of rap icon Talib Kweli’s four historic Rawkus Records albums, including the underground classic, Mos Def & Talib Kweli are Black Star, in a limited edition two-tone black on black picture disc, available now at https://smarturl.it/RespectTheClassicsEstablished in 1996, Rawkus Records jump-started the careers of legendary artists such as Talib Kweli, Mos Def and Pharoahe Monch, among many others.Mos Def & Talib Kweli are Black Star was released on August 18, 1998, to critical acclaim. The title is a reference to the Black Star Line, a shipping company founded by Pan-Africanist Marcus Garvey. The album deals with modern-day issues, philosophies and life in Brooklyn. The two MCs had planned to release solo albums around the same time, but decided instead to collaborate on a full-length album. The first single, “Definition (song),” is a reaction to hip-hop’s fascination with death, dedicated to both Tupac Shakur and the Notorious B.I.G., with a chorus that gives a nod to Boogie Down Productions’ “Stop the Violence.” “Children’s Story” is a re-imagination of the Slick Rick original, featuring Mos Def cautioning against materialism. The second single, “Respiration,” featuring Common, includes a Hi-Tek produced beat that samples Don Randi’s “The Fox” and another from the hip-hop documentary Style Wars. The track offers a melancholy ode to city life, with references to organic life functions such as breathing, eating and sleeping, but with an ominous edge, as Kweli raps about “sitting on shitty steps/we stooped to new lows, hell froze/the night the city slept.” The album peaked at No. 53 on the Billboard Top 200 and No. 13 on the Hip-Hop Albums chart, but has become considered a classic since then.The other Talib Kweli titles to be reissued on vinyl include Quality, The Beautiful Struggle and Train of Thought, the collaboration between Talib Kweli and Hi-Tek dubbed Reflection Eternal. Quality, originally released in 2002, has not been available in vinyl since 2006, and includes the singles, the Kanye West-produced “Get By” and “Waiting for the DJ.” The Beautiful Struggle, which came out in 2004, has been out of print on vinyl since 2006, and includes the singles “I Try” (featuring MJB) and “Never Been in Love.” Train of Thought, released in 2000, produced the singles “The Blast” and “Love Language,” and hasn’t been available on vinyl since 2003.