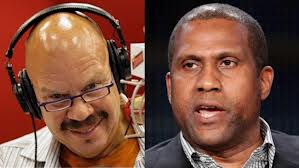 Ever since Senator Barack Obama turned down Tavis Smiley’s invitation to be on the panel at his annual “State of the Black Union” discussion, which was held on the same day Obama announced his presidential campaign in Illinois, Smiley has been consistently critical of President Barack Obama. Joined by Cornell West, the two have pointed out and criticized Obama for not caring about the state of impoverished and Black Americans.After the President used Dr. King’s Bible to swear in at this inauguration, Tavis Smiley didn’t hesitate to weigh in on what he thought of this. “The president wants to channel King so badly that he’s decided to use Dr. King’s Bible at the inauguration ceremony tomorrow. Obama is a politician, and a pretty good one, but King was a prophet. And while I can appreciate the president’s fascination with King’s legacy of unarmed truth and unconditional love, I’m feeling some sort of way about King being used symbolically for public pomp and circumstance, but disregarded substantively when it comes to public policy.”Well, in typical Tom Joyner fashion, he didn’t hesitate to weigh in on what he thought about Tavis Smiley’s comments regarding President Obama. “¦ I believe that Tavis is the one fascinated with Dr. King’s legacy, but more importantly Tavis is fascinated with his own legacy, and that’s not good. He wants more than anything to be remembered the way Dr. King was, and to some how make that kind of mark on the world. Dr. King wasn’t concerned about how he would be remembered, he was concerned with doing good and doing right. In the end, that made him great. Tavis has done a lot of good things but his obsession with becoming great is destroying him. The whole issue with the inscription on the King Memorial illustrates the differences between Tavis and Dr. King. Days before he was killed, believing that death was imminent, Dr. King dealt with it publicly in his Drum Major speech. Dr. King knew good things would be said about him in death and he was humbled at the idea of it. Tavis is afraid of what will be said about him and it’s driving him crazy.”Does Tavis have a point or his he overly critical of President Barack Obama due to personal reasons? Is Tom Joyner correct in his assessment of Tavis Smiley or his blinded by his appreciation for the President?

Martin would not be happy that wall street goes unpunished and that the social safety net is being cut and cut again with Obama and Dems being complicite. An AG who defended big banks is refusing to hold anyone accountable. A president who smoked as much dope as he could going after medical marijuana. Obama surrounding himself with white men would not go unnoticed by Martin. Blacks don’t get a pass from Obama, who is black, why should he get a pass because he is black?

I hate that we can’t at least agree on what we have in common and that is SO much that we can all do for the issues Tavis finds so troubling instead of making up stuff over which to publicly denigrate each other. I’m thinking that Tavis, in his so-called journey toward truth believes the best way to find it is to declare everyone else as a liar. Just read an article in Newsweek in which he lambasted Quenton Tarrantino regarding his interpretation of slavery in D’Jango. Wow, really? Hey Tavis! Here’s an idea! Why not try to broker a deal with Hollywood heavy hitters to fund that ‘historical tableau’ you have identified as missing in our entertainment media??? DO THAT INSTEAD. Maybe then your legacy will be secure in your mind and perhaps in ours as well. Peace to all.

Why all the fuss Tom, The African American People of the USA Are Not Talked About Much Anyway. Hispanics Are The New Kids On The Block. Stop This Mud Slinging And Help Fight This Poverty, Murder, and Joblessness. The Klan Are Loving This. Blacks Against Blacks. Every Man, Women, and Child Should Be Accountable. Why Not Make Our President Unaccountable For His Actions. His Cabinet is 98.9 % White. He Will Be a Lame Duck In Only 2 Years. Stop Spreading This BULL [email protected]…. Tavis is a Black Make Just Like You………Wall Street Boys Love To Keep Black Folk Distracted. I Stop Listening To Tom & Steve A Long Time Ago.
Please Stop This End Fighting!

Radio FactsDecember 9, 2013September 18, 2022
December 9, 2013September 18, 2022
FacebookTwitterInstagramYoutube
We use cookies on our website to give you the most relevant experience by remembering your preferences and repeat visits. By clicking “Accept”, you consent to the use of ALL the cookies.
Do not sell my personal information.
Cookie SettingsAccept
Manage consent