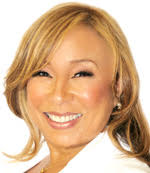 Emmy Award-winning Producer, TV Host, Syndicated Radio Personality, and Pop Culture Commentator Tanya Hart and Robert Papazian, an Emmy-winning veteran television producer (Inherit the Wind, The Day After, the highest rated movie made for Television, Rome) and former CEO and co-owner of Hollywood’s Sunset Gower Studios has been elected as co-chairs of The Caucus for Producers, Writers & Directors for a two-year term (www.Caucus.org).Tanya becomes the first African-American and first woman to head up the 40-year-old entertainment industry trade organization. A recent recipient of Distinguished Service Award from The Caucus, Tanya also serves on the Caucus Foundation board of directors, which provides grant support to the next generation of TV and new media producers, writers and directors.“We are honored and truly humbled by having the opportunity to co-chair The Caucus for Writers, Producers, and Directors. For the past 40-years this organization has provided the gold standard for our industry. Bob Papazian and I, along with our membership, plan to continue that tradition with a renewed sense of inclusion and creativity across all platforms. You will see some exciting things coming out of the Caucus, stay tuned,” said Tanya and Bob.