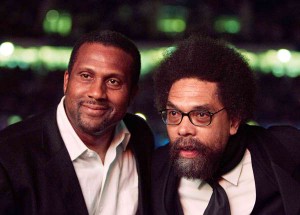 Tavis Smiley and Cornel West are now channeling Thelma and Louise (lol) on their Poverty Tour of America to focus on Obama’s lack of concern for poor people. What in the hell is wrong with this two fools.For the first time I’m going to agree with Steve Harvey in his assessment of the situation. Harvey stated on his show “I was a huge fan of Cornel West,” he said. “Tavis, I seen him coming a mile away. His anger started when he had a town hall meeting, President Obama couldn’t come because of the campaign trail  and he sent Mrs. Obama.  He has held that grudge every since.”Is it true that Cornel is pissed because he did not get an invitation to Obama’s inauguration?   How infantile.   Harvey added:   “Have you ever been invited to the damn inauguration?  Did Bush send for you? Did Clinton send for you? Did Reagan send for you?” I agree Steve… Is it me or does Cornel look homeless?Harvey also states, “You don’t have any real basis behind your dislike for this man”¦you keep masking it saying it’s not about hate. Then what is it about? Poverty existed before January 20, 2008. Where was your damn bus then?”Tavis suggests that President Obama sit down with he and West for two or three days to discuss poverty in America.   Is Tavis mentally ill? Does he know he can’t hold a candle to President Obama? Nobody knows who Tavis is anymore. ” Harvey said, “Who in the hell got 2-3 days for your ass? I ain’t got time to sit down with your monkey behind for two, three days, let alone the President of the United States. We got three wars going on, the economy crashing and we going to sit down with Tavis ass for three days?”Harvey alluded to a more sinister motive for West and Smiley’s Poverty Tour, asking, “Where are you getting  the money for these buses?”   He ended his rant by saying that he’d spotted an Uncle Tom driving a bus.