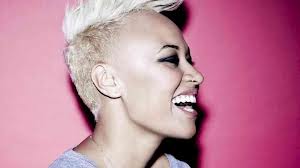 If you don’t know then you need to know about Emeli Sande’. Jay-Z said, “She is gong to be a big deal.” Alicia Keys said, “She is a magnificent new artist.” and Adele said, “How incredible is she!.” Well, who cares what those music icons think…You can see for yourself.

Singer Emeli Sande’ is a rising star here in the United States and if you missed her recent tour, You can see her perform Live Monday February 11TH AT L.A’s Key Club and the concert will also be streamed live.

The concert is sponsored by Chapstick and the re-launched entertainment site Myspace as part of Chapstick Sessions. Sande’s latest album with the hit single “Next to Me” was the number one album in the U.K. in 2012.

“I’m very excited about the Chapstick ® concert in L.A. You know, as a new artist, it’s great to have this exposure and introduce my music to a new audience. And this is a show that’s going to be livestreamed on Chapstick ®’s Facebook page and on MySpace. Anyone around the country can see it. So I’m just very excited to get going and share my music.”
FOR EACH CONCERT LIVE STREAM VIEW, $1 WILL BE DONATED TO THE MUSIC EMPOWERS FOUNDATION, UP TO $50,000 TOTAL.
LEARN MORE AT FACEBOOK DOT COM SLASH CHAPSTICK ® AND CHAPSTICK ® DOT COM.

Police Officer Run Over by SUV in Buffalo

Black Woman Angry at Looters Because she Can’t Buy Food for her Kids, Gets Gun Pulled on her By Black Man Looting (video)

Editorial: Also … Pay Attention to the Industry Companies who are Not Supporting Black Out Tuesday

99 Years Ago TODAY Black Wall Street was Burned to the Ground by Racists in Tulsa, OK (videos)

Black Male Singers who Stand the Test of Time