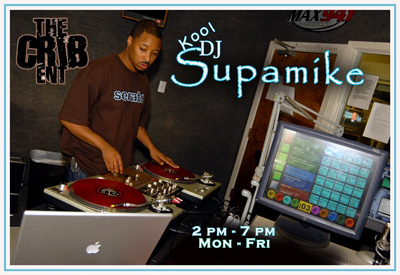 Kool DJ Supa Mike of Baton Rouge’s biggest Hip-Hop and R&B Radio Station Max 94.1 will be holding his 8th annual birthday celebration on Friday, March 5 and Saturday, March 6. “It’s time to do it big,” said Kool DJ Supa Mike.The first night of festivities on Friday will feature a wide range of performances. Mystikal, Juvenile, Down Bad Entertainment and more will be performing at club Shenanigans located at 2377 N Flannery Rd. Murphy Lee and Kyjuan of the St. Lunatics will be hosting the party Saturday at the Lyceum ballroom located on 124 Third St. in the heart of downtown. Some of the hottest DJs in the nation will be showing support for Baton Rouge’s top DJ including, DJ Drama, DJ Chico, DJ Incredible and more. According to Kool DJ Supa Mike, the reason for the two parties was because of the wide range of people he DJs for. “I service a lot of people in Baton Rouge, the college crowd, the political world and of course radio,” said Kool DJ Supa Mike. “I wanted to do something for every audience I service.” In the past, the event has had guest from Lil Flip to Yo Gotti.Baton Rouge’s biggest DJ has credited his success and great relationship with artists simply to treating them good. “I’ve been in the game for 15 years,” said Kool DJ Supa Mike. “I treat them good when their young in the game so when they get there it’s good.” Tickets are available at Kool DJ Supa Mike’s website thecribent.com and start at $10.About Kool DJ SupaMikeKool DJ Supa Mike can be heard in The Crib, his highest-rated weekly radio show, Monday through Friday from 2 to 6 pm on Max 94.1 FM where his show is number one in the Baton Rouge metro area for his demographic. He also serves as the Radio Station ‘s Music Director and was nominated for the Music Director of the Year by R&R Magazine for two consecutive years.Kool DJ SupaMike has made two national appearances on BET’s Rap City in the Basement as well as the deejayed the MTV2 2 Dollar Bill Tour featuring Tweet and Jurassic 5. Recognized for his talents, he has won the Mix Show Power Summit “DJ Threat Award” for being a top up and coming DJ in 1995. He went on to also be nominated at the Mix Show Power Summit for “Dirty South DJ of the Year” for three consecutive years. Supa Mike was most recently recognized as the Most Influential DJ in Baton Rouge by Source Magazine.As he’s grown to become one of the area most popular voices in radio, he is also one of the most sought after DJs across the nation. Known to rock any party, his reputation as a “turntable assassin” precedes him.

Ray J is NOT in Talks with Trump Administration [Official Response]

Atlanta's 11 Alive Goes Behind the Scenes of Top Morning Radio...

Lizzo’s Concert for SiriusXM and Pandora

Donald Trump Tweets He Has COVID-19