Adrian Miller is the CEO and Managing Partner of OBE. He’s from St. Louis but moved to Los Angeles at a young age. He started his industry tenure in Urban Radio working as an intern for a college station while attending Tulsa University. He progressed from there to working for PMP Promotions, HITS Magazine, Loud Records, Immortal Records and Warner Brothers Records. He held most of those positions at a management level at a young age when most people are at the bottom of the industry ladder climbing the rungs. After gaining vet status quickly, he diversified his skills and became interested in start-ups; Worldwide Heavyweight, Pheed, Xyion, and now OBE which is his current successful venture. He manages and is also a managing partner for/with Anderson. Paak. I’ve known Adrian for 20 or more years and it’s always great to see true industry friends speak their goals, do the work, then achieve them. I’ve rarely seen someone who is more creative, determined and hustles like he does. He’s been touring the world with Anderson but gladly accepted an invitation to talk to Digital and Radio Facts’ readership about his industry theories, legacy, lessons and the future.

“I was encouraged, early on to be honest about what I liked and to understand my value.”

KevRoss: You have a lot of experience working for corporations in the industry like Warner Bros and HITS magazine but you’ve also been an entrepreneur for many years as of late? Which do you prefer?Adrian Miller: I definitely enjoy both, you should have skills for both. When I think of the corporate environment it’s just more logistics and protocol, always checks and balances. This same skill set is important for smaller businesses to develop. But large companies with their board of directors and culture have to also learn to adapt and move on a pivot. There is good on both sides and I enjoy learning from both.KR: You have held many leadership positions in the industry at a younger than average age. How did you manage that?AM: I was encouraged, early on to be honest about what I liked and to understand my value (thanks to Glenda Joyce). I try to speak on what I understand and learn from what I do not know. Usually, bosses like people to be more observant and less “know-it-all.”KR: On average, how many hours do you work each day?AM: Roughly 10-12…but everyone who knows me always tells me to rest more.KR: What’s the best advice that you would give other industry entrepreneurs?AM: Be hands on and open for change…it’s coming. 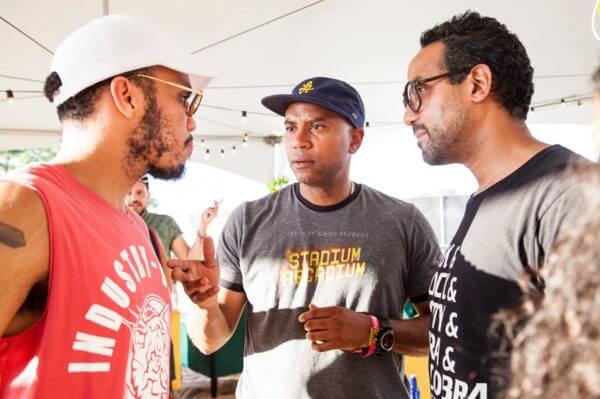 Anderson .Paak, Adrian Miller and AFROPUNK owner Mathew MorganKR: When you decide to work with talent, do you go by the talent only or is it important to see if they have good business acumen? What are some of the traits that make you want to work with someone?AM: Looking for talent for me is not any different now versus when I started as an A&R rep. All the artists I find myself gravitating towards have the same work ethic and stand for something in their art. They have a voice and care about what they are doing with their God-given talents. It’s that important to me to afford those that work harder at it than me before I can feel comfortable just handing over a platform for an audience. I want to believe 100% and it’s not just my opinion. It takes research and feedback. People always ask me if I like it, but I’m only one person it also matters if others will enjoy it.KR: Congratulations on your success with Anderson .Paakit has certainly been a long time coming. How did you meet him?AM: I was working with friends of his and connected the dots to their extended family of musicians and his name kept coming up. People were sending me demos of his and talking about him.

Adrian speaking on a panel for the Grammy MuseumKR: Is it true that you actually sold your house in order to finance his project? Tell us about that?AM: I survived the housing crash with a really good piece of property and wanted to start a company but was stuck doing my agency Xyion (music placement/consulting) business. Not a bad business, but when I ran into Anderson I knew it was something special, he is the truth.So yes it’s true I sold the house I was living in, to downsize and make sure we could keep going no matter if people loved his music now or loved it later, they were gonna eventually love it. It was definitely one of the craziest moves I ever did in my life. Something had to give and so it was the house, easy choice when I’m living in a family neighborhood for eight years and I’m a single male, it was time for a change because I felt retired and I was ready to regroup my hustle again. The music business requires you to stay in the loop, meetings, studio, traveling, etc.KR: Anderson has stated that most people don’t get him unless they see him perform or work with him in the studio, was it the same with you?AM: True, but it’s always like a dream working with him because he doesn’t make bad music. He might not finish an idea but once it crosses that threshold from idea to song it’s usually pretty solid. He is one of the greats and I don’t just say that lightly. Having been in the rooms with creatives like; D’Angelo, Prince, Stevie, Sting, and Dr. Dre … Anderson is crazy with his structure and finding his moment in every instance.

“It’s my belief that living properly fits us all to be where we are supposed to be in the exact time.”

KR: When was the moment that you realized your vision became a reality?AM: When he signed on board and we were rocking. You have to note the first meeting I took him to was to meet with Dr Dre’s attorney. The idea of doing business with Dre was from day one. We just needed to get there.

Adrian with talk show host Ellen after recent Anderson .Paak performance.KR: Are you surprised at his level of success?AM: This is just the tip of the iceberg. He is unstoppable and such a treasure to work with and for him … the sky is the limit. I’m both gracious and blessed at this space in my life.KR: As you know, we work in a progressive industry that can change in an instant. Hype has always been viewed as a red flag or a turn off to true industry pros because it’s so common. How do you promote without hype?AM: We hire the best to do what they do. There’s a fine line but when you have reputable names & partners that are good people backing your moves, it’s easy. From friends like Kevin Morrow, Peanut Butter Wolf, Taz Askew, Jimmy & Larry at Apple even Ty Cannon and Dr Dre and the Aftermath/Beats team it’s so much easier … Wait did I forget Ghazi and Nima (got’em)!KR: Do you think that your various positions in the industry have prepared you for this moment?AM: It’s my belief that living properly fits us all to be where we are supposed to be in the exact time. Nothing will be as it was only what it will be. So yes I was prepped for this precise moment.KR: Who are some of the industry players that you admire most and why?AM: Loving the questions: I look at so many people to mold what it is I do but always keeping true to my own form. There is a super long list of friends, mentors, and family that have been my support and the core for what I do.Eddie Harris for my first job in radio and Graham Armstrong for the introduction to the key players in Urban Radio – along with Mark Boyd who was a big brother to me, also Christian Carbaza; They have all since transitioned on so rest in power to each of them.My Godmother is Claudette Robinson (Smokey Robinson’s ex-wife and a former original member of The Miracles), so elegant and never ever has a bad word to say about anything or anyone, her long talks are guidance and strength. I keep my positive vibrations from her for sure.Dan Charnas, Kim Buie, Orlando Aguillen all encouraged me to find the talent. Paul Stewart, Mike Ross, Steven Rifkind, Amanda Demme, Happy Walters, Jerry Heller, Rick Rubin and Benny Medina all taught me to, stay close to the talent.Fabian Duvernay, taught me loyalty is royalty and Clarence Avant, Dr. Dre and E. David Ellington have explained to me “the art of the deal”. Above all I have always secretly wanted the career path of Harry Belafonte Jr. he is the epitome of class. 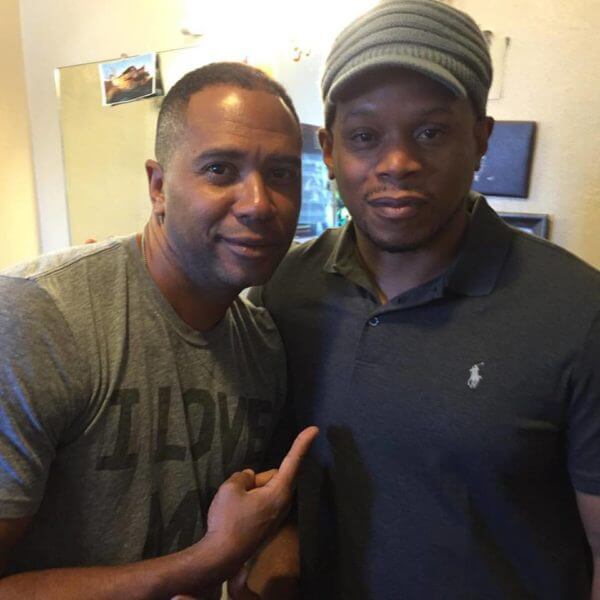 Adrian with MTV and Shade 45 host, industry vet SwayKR: How has your life changed over the last year with the success of Anderson?AM: Went from a busy week to a flurry of daily busy tasks to address.KR: What have been some of the hardest yet most important lessons that you have learned in the industry?AM: Advice from experienced industry vets was to “learn everything”, while your new boss would say, “only do one thing”. I learned everything requires attention to detail and to cultivate you must time your time and go at your own pace.KR: What’s next for Adrian Miller?AM: We are still just starting on Anderson .Paak – wait and see the next phase. I will continue to help build structure our business for the brands: OBE, Anderson .Paak, The Free Nationals, NxWorries, etc …s o much more to come. The possibilities are endless. I give thanks for your questions it really made me think Kevin, I applaud you and Digital and Radio Facts for the continued support. Adrian Miller