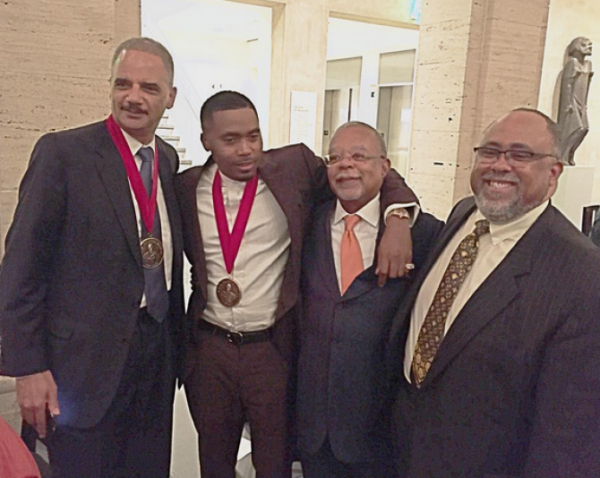 As reported by the Associated Press, the iconic, Muhammad Ali, U.S. Attorney General Eric Holder and rapper Nasir “Nas” Jones are among the 2015 recipients of Harvard’s W.E.B. DuBois Medal.
Ali, who proclaimed to be and is recognized by many as The Greatest, along with Nas, who once rapped, “I’d open every cell in Attica, send them to Africa,” and Eric Holder who once said, “I think there are too many people in jail for too long and for not necessarily good reasons,” are have something in common.  They all believed in something and took action to make it happen.
Nas and Holder came together yesterday at Harvard for an awards ceremony and panel discussion. Ali had to be patched in via video link due to his battle with Parkinson’s disease.
Harvard’s W.E.B. DuBois Medal honors those who have made significant contributions to African and African-American history, culture, and human rights in general.
Other 2015 recipients include Marian Wright Edelman, founder and president of the Children’s Defense Fund; Mellody Hobson, president of Ariel Investments and chairman of the board of Ariel Investment Trust; Charlayne Hunter-Gault, the first black woman to enroll in the University of Georgia; and artist Carrie Mae Weems.
I”m sure most of us are but If you are not familiar with W.E.B DuBois, he was was a sociologist, historian, civil rights activist, Pan-Africanist, author and editor. Born in Great Barrington, Massachusetts, Du Bois grew up in a relatively tolerant and integrated community. After completing graduate work at the University of Berlin and Harvard, where he was the first African American to earn a doctorate, he became a professor of history, sociology and economics at Atlanta University. Du Bois was one of the co-founders of the National Association for the Advancement of Colored People (NAACP) in 1909.