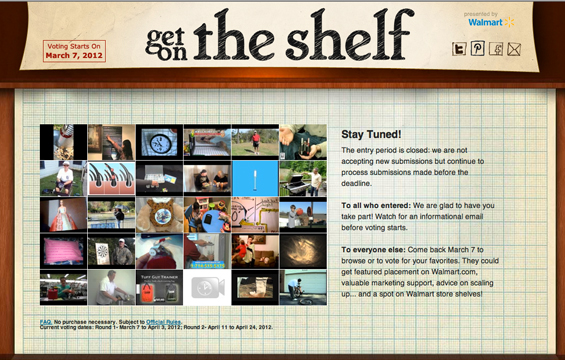 I have been in Walmart a few times here and there and I must say they have a plethora of items. If they didn’t already have enough stuff, now they have something you can’t buy in the store. Walmart actually has  a reality web series about to launch.Walmart  is launching its first-ever original reality series developed for the web. The first episode can now be viewed at getontheshelf.walmart.com, and Walmart is asking the public to decide which new products from American entrepreneurs will appear on its shelves this fall.The new weekly web series highlights 20 finalists in its Get on the Shelf contest. Thousands of business owners and inventors from around the country entered Walmart’s crowd-sourcing product contest. Each week, four different finalists will showcase their product in an effort to gain public votes and get their item sold on Walmart.com, and possibly in Walmart stores.”Get on the Shelf celebrates the resilient and tenacious spirit of American entrepreneurs, many of whom have been working hard for a big break like this,” said Kelly Thompson, senior vice president of merchandising for Walmart.com. “The web series creates more exposure for finalists to share their inspiring stories, which makes for captivating reality TV that’s also interactive since American consumers can vote for the next great product at Walmart.com.”The five weekly “webisodes,” which go live on Tuesdays beginning at 12:01 a.m. ET from Sept. 24 through Oct. 22, feature a group of finalists under the same theme, such as Kid Stuff or Great Gadgets. The webisodes give viewers a chance to learn more about the entrepreneurs behind the inventions and watch as they pitch their product to a panel of Walmart.com judges.Viewers can visit getontheshelf.walmart.com to watch the webisodes and cast their votes online. Webisodes are produced by VIMBY (Video In My BackYard), the digital studio of Mark Burnett Productions (The Voice, Survivor, Apprentice). The VIMBY team has producing credits on many important reality shows including American Idol, Shark Tank, Extreme Makeover: Home Edition and Rock Star: INXS.After each weekly webisode, voters have 72 hours to cast their votes for the winner, who will have their product sold on Walmart.com. A grand prize winner will also be selected based on the number of preorders of the product, and will receive additional support marketing from Walmart.com plus an introduction to the Walmart stores’ merchandising team to potentially be sold in Walmart stores. Last year’s three winning products are sold in select Walmart stores and on Walmart.com.The schedule of weekly webisodes and the participating finalists is available at: .