NASHVILLE, Tenn. (TSU News Service) – New and returning students coming to TSU this fall will see an addition to the main campus when the university unveils a specially commissioned, bronze tiger sculpture on August 1.

The 500-pound, 6-foot long statue culminates a year-long, student-led project by nationally recognized sculptor David Clark, who created Tom the Tiger at the University of Memphis.

TSU President Glenda Glover says the statue represents the Big Blue pride and strength of the entire TSU community and the spirit that drives the university’s excellence, from its academic offerings to its athletic programs.

“I want to thank our very courageous students and the student government leadership for their foresight in commissioning this beautiful monument that adds so much beauty and honor to our campus,” says Glover. “Tennessee State University will be proud to showcase this tiger as one of the major artistic pieces for visitors and alumni to see and admire when they return to their campus.”

The tiger will be located in front of the Floyd-Payne Campus Center across from the McWherter Circle. When mounted on its custom-made base, the statue will stand more than 6 feet tall. 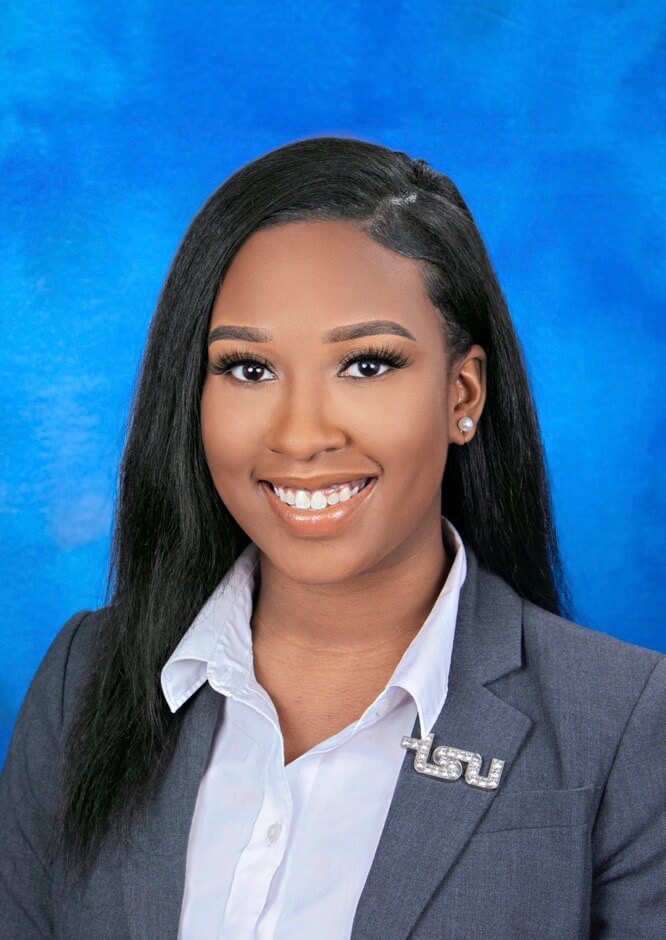 Katelyn Thompson, student government association president, says while adding to campus beautification, the tiger will help promote the university, help to bring people on campus, as well as help with enrollment.

“When I ran for the SGA presidency, although I had other ideas, the main thing on my platform was to bring a tiger,” says the graduating senior from Memphis. ”As I became president, I was able to bring administration, alumni, students and the community around the idea for a tiger. They were all on board and we, as students, raised the money for the tiger.”

Thompson says she personally chose David Clark for the project because she was familiar with the sculptor’s work not just around the country, but in her hometown, “especially with what he did to bring to life Tom the Tiger at the University of Memphis.”

“We just needed a little campus beautification and a lot of students wanted something they can take their senior picture around and we didn’t have one,” says Thompson, a double major in criminal justice and psychology, who will receive her degree at the August 1 commencement.

Frank Stevenson, associate vice president for student affairs and dean of students, congratulated the student leadership for the idea of “placing a permanent tiger statue” on campus.

“This tiger represents the very best of a challenging time,” says Stevenson. “The student body and the administration came together and got it right with this monument that will forever represent TSU pride.”

Joni McReynolds, president of the TSU National Alumni Association, adds that students and the university have been through a lot – with COVID-19, a tornado in early March – and the tiger will represent their strength and resilience.

“This gives us a sense of our rallying point,” says McReynolds. “Once the students see that, they will be enthused, they will circle that tiger, that will be their strength when we have to come together to face forces. That tiger will be the strength of the campus.”

Like Reynolds, Student Trustee Braxton Simpson also points to the difficulties of the pandemic, requiring students to leave campus, as well as the tornado, which caused major damages to campus facilities.

“In the midst of everything that we have endured this school year, what better time  to leave our mark on TSU when we cannot physically be on campus,” says Simpson, an agricultural sciences major from Atlanta. “This Tiger is not just a tiger—it represents the perseverance, diligence, pride, empathy, and grit of a TSU Tiger, of our student body.”

Fellow student Skylar Suttle, of Memphis, who is Mr. Freshman, agrees. “I am excited about the tiger,” he says. “It shows the determination of the leadership, it shows how much the students of TSU care about the beautification of our campus. I think it is going to be a good sight to look at.”