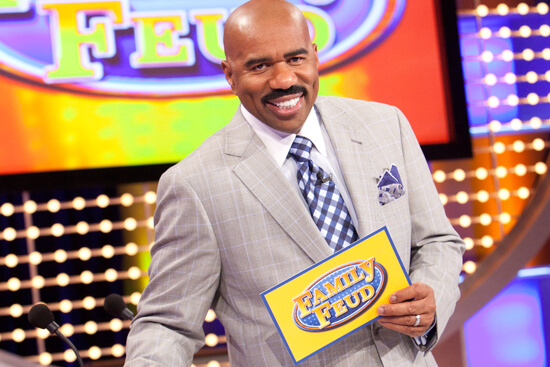 Steve Harvey has literally gone from sleeping in his car to being able to afford any car he wants. Through hard work, diligence, and according to him, prayer, Steve is on believably unbelievable ride. It seems as if everything he touches surpasses gold and turn into platinum. With an award-winning syndicated radio show, a very successful daytime talk show, and a bestselling book, the comedian turned entrepreneur is winning in every sense of the word.
Just when you thought it couldn’t get any better, Steve Harvey can officially add another milestone to his list of accomplishments.  As the host of Family Feud, Steve helped the show top all programs in syndication for the week of June 8 with a 6.1 HouseHold rating.  Family Feud beat out Wheel Of Fortune and Judge Judy,  both of which tied at 6.0, according to Nielsen. This was the absolute first time Family Feud finished as the top-rated program in a week. The show also topped the W18-34 and W18-49 demos, and tied with The Big Bang Theory in A18-49 and W25-54.
The Sunday night premiere of Celebrity Family Feud was also a win for Steve Harvey and ABC as the show was the top program of the night.  Whatever Steve Harvey is doing, they need to package it up in a bottle and sell it because the man can’t lose right now.