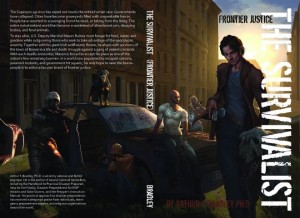 What will ultimately end the world? While many people are infatuated with the threat of a zombie apocalypse, it’s safe to say that no such doom is in mankind’s future. The question then becomes what should people really be worrying about? Dr. Arthur Bradley, author of several bestselling books on disaster preparedness, including The Prepper’s Manual, says that people should start by preparing for likely threats first. These include what he coined as the Five Horsemen of Death””tornadoes, earthquakes, hurricanes, tsunamis, and floods. “Prepare for those, and you’ve gone a long way to surviving our world’s natural disasters.”Okay, good advice, but what about the rare, high-impact events that might result in the end of the world as we know it (TEOTWAWKI)? In his book, Disaster Preparedness for EMP Attacks and Solar Storms, Dr. Bradley provides a list of events most likely to destroy modern civilization:Pandemic, natural or man-madeElectromagnetic pulse (EMP), caused by the Sun or a high-altitude nuclear explosionAttack with nuclear weaponsAsteroid strikeSupervolcano eruptionWidespread agricultural crisisGlobal financial collapseThat’s a frightening list of threats, any one of which could set the world back a few centuries. So, how does someone prepare for events that could lead to the loss of all modern conveniences and infrastructures? Dr. Bradley answers this by saying, “If you’re preparing for TEOTWAWKI, it’s important to carefully consider all of your needs. People have a tendency to focus either on food (the preppers) or bullets (the survivalists) but forget about many other needs, such as water, heating, electricity, medicine, and transportation.” In his book, the Handbook to Practical Disaster Preparedness for the Family, he discusses a complete list of 14 needs that should be addressed as part of any effective disaster preparedness plan.With the release of his novel, The Survivalist (Frontier Justice), Dr. Bradley uses fiction to describe the horrific effects of a global pandemic. The story follows a lone U.S. Marshal as he travels across the wasteland that was once the nation. Not only must the lawman forage for supplies, he must also confront feral animals, disfigured survivors, and violent convicts who were released from penal institutions. Dr. Bradley says, “I’ve always loved a good end-of-the-world adventure story, and I used this book not only to entertain but also to teach. A pandemic is probably the single biggest threat to mankind. Most people don’t realize that smallpox killed over 300 million people in the 20th Century alone. A global pandemic, perhaps caused by avian flu, SARS, Ebola, or some yet undiscovered virus, could wipe out a huge percentage of our population and destroy our world’s infrastructures. Imagine a world without the distribution of electricity, food, water, and medicine; without functional police forces or hospitals; without television or the Internet. The unfortunate reality is that, without these services, the majority of people would die within a few short weeks. Those who remained would be driven by basic needs and likely forced to live under a more brutal rule of law.”That’s a sobering statement from an expert well known for his no-nonsense approach to disaster preparedness. Everyone would be better served by following Dr. Bradley’s advice to worry less about undead walking the streets, and more about the new strain of avian flu spreading across parts of China. He warns, “If this virus ends up being passed through airborne transmission, the entire planet could be affected. Given its extremely high mortality rate, the death rate could surpass that of any disease ever seen in human history.”