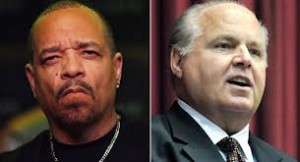 Ice-T is not feeling Rush Limbaugh at all, after the radio host was impressed that Ice-T knew the meaning of the word “tyranny” in an interview he did with the London news. In the interview, Ice-T defended gun ownership, calling the right to bear arms “the last form of defense against tyranny.” Limbaugh praised his stance on the issue, but found his use of the word “tyranny” with a British socialite exceptional.”He knew the word “˜tyranny,'” Limbaugh said. “And he knows that tyranny comes from government representatives. Double impressive.” Ice-T did not take kindly to his remarks. “Rush Limbaugh said he was impressed I knew the word “˜tyranny'”¦ He’s a racist piece of sh”“,” he tweeted.Later, he responded to some of the replies, saying “Hahah some of y’all are saying Limbaugh is not racist?? Check this” and linked to an article called “Top 10 Racist Limbaugh Quotes.” He also directed fans of Limbaugh and Bill O’Reilly to “UNFOLLOW now.”