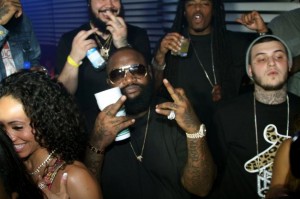 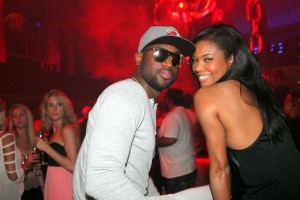 Last night, Rick Ross partied like a rock star at the Hennessy V.S event at Mansion in South Beach. The rapper arrived to the club ready to have a good time with a ‘double cup’ in one hand and several members of his MMG crew.On Sunday night in South Beach, the celebrities converged at the exclusive Hennessy V.S soiree at LIV on Sunday. Actress Gabrielle Union and her long-time boyfriend, Miami Heat star Dwyane Wade were spotted cuddled up in a V.I.P. booth, while popular producer and DJ David Guetta bounced around the dance floor sporting his one-of-a-kind iced out ‘LIV on Sunday’ chain. Actor Wilmer Valderrama, retired NFL star Eddie George, DJ Stevie J, MMG rapper Stalley, YMCMB President Macke Maine and Busta Rhymes main man Spliff Star were all in the house.PHOTO CREDIT: Thaddaeus McAdams