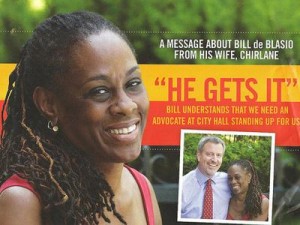 ESSENCE’s June issue features an exclusive interview with Chirlane McCray, wife of New York City Democratic mayoral candidate Bill de Blasio. In the piece, “The Politician’s Wife,” the woman who could be the first lady of New York City talks about outing herself in ESSENCE in the 1970’s — and how she ended up falling in love with a man.In the ESSENCE article, writer Linda Villarosa recounts how McCray wrote a groundbreaking essay in a 1979 issue of ESSENCE entitled, “I Am a Lesbian” — in what was perhaps the first time a Black gay woman spoke openly about her sexuality in a Black magazine. Now, 34 years later and happily immersed in a “traditional marriage,” McCray returns to the pages of ESSENCE to talk about life’s unexpected twists and turns, the fluidity of love, dirty politics and her 180-degree turn.”I am more than just a label”¦labels put people in boxes, and those boxes are shaped like coffins,” said McCray. “Finding the right person can be so hard that often, when a person finally finds someone she or he is comfortable with, she or he just makes it work. As my friend Vanessa says,’It’s not whom you love; it’s that you love…’ “