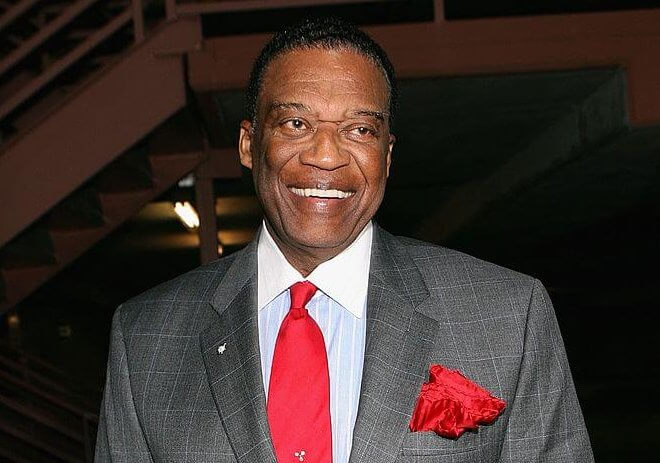 Originally posted September 19, 2017 – Actor Bernie Casey has died at the age of 78. The actor fell ill and was hospitalized for a couple of days when he died peacefully. Casey was a former athlete turned actor who was also a very talented artist. No information on services yet. Originally posted Sept 19, 2017.

Casey began his acting career in the film Guns of the Magnificent Seven, a sequel to The Magnificent Seven. Then he played opposite fellow former NFL star Jim Brown in the crime dramas …tick…tick…tick… and Black Gunn. He played a leading role in the 1972 science fiction TV film Gargoyles. He also played Tamara Dobson‘s love interest in 1973’s Cleopatra Jones.

From there he moved between performances on television and the big screen such as playing team captain for the Chicago Bears in the TV film Brian’s Song. In 1979, he starred as widower Mike Harris in the NBC television series Harris and Company, the first weekly American TV drama series centered on a black family. In 1980, he played Major Jeff Spender in the television mini-series The Martian Chronicles, based on the novel by Ray Bradbury.

In 1981, Casey played a detective opposite Burt Reynolds in the feature film Sharky’s Machine, directed by Reynolds. He reunited with Reynolds a few years later for the crime story Rent-a-Cop.

In 1983, he played the role of CIA agent Felix Leiter in the non-Eon Productions James Bond film Never Say Never Again. He co-starred in Revenge of the Nerds and had a comedic role as Colonel Rhombus in the John Landis film Spies Like Us. Casey also appeared in the movie Hit Man.

Also during his career, he worked with such well-known directors as Martin Scorsese in his 1972 film Boxcar Bertha and appeared on such television series as The Streets of San Francisco.

He played a version of himself, and other football players turned actors, in Keenen Ivory Wayans‘s 1988 comedic film I’m Gonna Git You Sucka. He played a high school teacher in Bill & Ted’s Excellent Adventure, released in 1989. Casey appeared as a very influential prisoner with outside connections in Walter Hill‘s Another 48 Hrs.. In 1992, he appeared as a Naval officer on the battleship USS Missouri in Under Siege.

In 1994, Casey guest-starred in a two-episode story arc in Star Trek: Deep Space Nine as the Maquis leader Lieutenant Commander Cal Hudson, and in 1995 as a guest-star on both SeaQuest 2032 as Admiral VanAlden and Babylon 5 as Derek Cranston. In 2006, he co-starred in the film When I Find the Ocean alongside such actors as Lee Majors.

Casey enjoyed painting and writing poetry. Look at the People, a book of his paintings and poems was published by Doubleday in 1969. He died at Cedars-Sinai Medical Center in Los Angeles on September 19, 2017, after a stroke. [source]

admin - January 16, 2021 0
Radio Facts: The Unsung series is some of the best-produced TV on Black music in the history of the music. TV One has struck gold with this show for several seasons. But these are some of the best shows to date. [...]