Home Radio and Music Industry News When President Obama Shouts Out Your Party You Must Be One of... 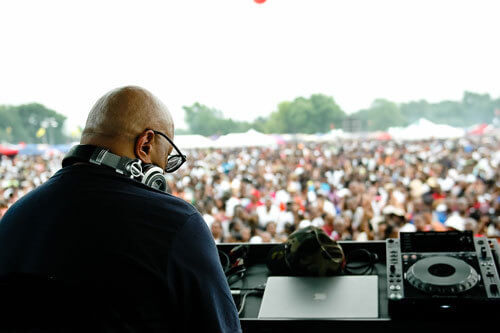 As the nation celebrated its independence on July 4th, thousands of Chicago house heads ascended to Jackson Park to do what Chicagoan's do every year- experience the Chosen Few. As early as 6 am, you can find people in Jackson Park looking for a good spot to set up shop. Grills, lawn chairs, coolers, and an even cooler attitude tend to be the requirements when attending the Chosen Few.For all of the media attention that Chicago receives due to the violence, not enough attention is given to an event like the Chosen Few. In it's 25 year, the weekend long house music festival celebrating Chicago’s homegrown dance genre went down July 2-5, 2015. The main event of the weekend was the 25th annual Chosen Few Old School Reunion Picnic on Saturday, July 4, 2015 in Jackson Park, which is right across the street from where I attended high school but that is another story for another day.Nicknamed the “Woodstock of House Music,” the Chosen Few Picnic may have seen numbers in the 50,000 range for it's anniversary year. For the record, there was no violence, no issues, no bullsh#t – this was plain and simply, a good time.The picnic featured performances from Stephanie Mills, Evelyn “Champagne” King and a host of others but it is the Chosen Few DJ's that keep the park rocking from sun up to sun down. This year featured Louie Vega and Kenny Dope Gonzalez, Derrick Carter, Stan Zeff, Keith Fobs and Greg Gray but as always there were sets by the Chosen Few DJs: Wayne Williams, Jesse Saunders, Tony Hatchett, Alan King, Andre Hatchett, Terry Hunter and Mike Dunn around the city and throughout the entire weekend celebration.The best tribute came when Chicago resident, President Barack Obama appeared on the Chosen Few Picnic scream to deliver a message to his fellow Chicago house heads. How cool is that sh*t? That is really more of a rhetorical question but all in all, it goes to show you the level of how music and the Chosen Few to be specific, has influenced even the President of the United States. All I can say to that is, “House music all night long!”