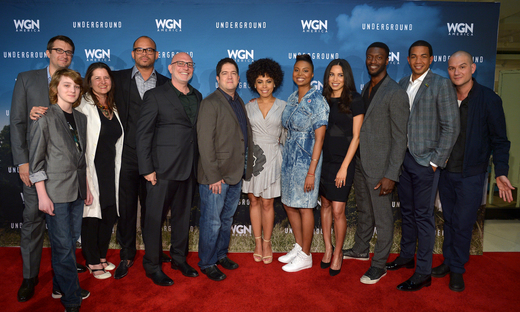 The stars and creators of WGN America’s record-breaking original series Underground presented an exclusive screening and panel discussion moderated by Deadline’s Senior Editor, Dominic Patten.
The first season of the hit series scored 3 million Total Viewers in Live + 7 viewing, and ignited Twitter as the #1 most social cable drama on Wednesday nights. “Underground” follows a group of courageous men and women who use their ingenuity, power and perseverance to attempt the greatest escape in history and break free, despite the dire consequences that awaited them on the other side. “Underground” was recently renewed for a second season that is set to begin production this summer for a 2017 debut.
From executive producer John Legend, “Underground” is created by Misha Green (“Sons of Anarchy,” “Heroes”) and Joe Pokaski (“Daredevil,” “Heroes,”) who executive produce alongside Academy Award-winner Akiva Goldsman (“A Beautiful Mind,” “I Am Legend”) of Weed Road Pictures; and Joby Harold (“King Arthur,” “Edge of Tomorrow”) and Tory Tunnell (“King Arthur,” “Holy Rollers”) of Safehouse Pictures; Get Lifted partners Mike Jackson and Ty Stiklorius executive produce. Additionally, Get Lifted oversees all elements of the show’s music. Anthony Hemingway (“The Wire,” “Treme”) directs.