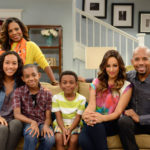 NickMom this fall will premiere Instant Mom , its first original scripted comedy series, starring and produced by Tia Mowry-Hardrict (Tia & Tamera). The half-hour, multi-camera series features Mowry-Hardrict as Stephanie, a party girl who trades in Cosmos for carpools when she marries Charlie (Michael Boatman, Spin City), who already has three kids. The series is picked up for 13 episodes and will premiere in the primetime NickMom block on the Nick Jr. channel, with encore episodes airing on Nick at Nite.

“First-generation Nickelodeon viewers are now moms and will soon be treated to NickMom’s first original comedy with someone they grew up watching and loving,” said Bronwen O’Keefe, Senior Vice President, NickMom. “We’re excited our audience will get to see Tia in her first starring role as a mom, joined by the very talented Michael Boatman and Sheryl Lee Ralph.”

In Instant Mom, Stephanie (Mowry-Hardrict) slowly grows into her role as a full-time stepmom while struggling to maintain some sense of her fun-loving, slightly irresponsible life. Sheryl Lee Ralph (Moesha) stars as Stephanie’s mother Maggie, and rounding out the cast are Charlie’s three kids played by Sydney Park (CSI: NY), Tylen Williams and Damarr Calhoun.

Sophisticated, savvy and an all-around sweetheart, actress Tia Mowry-Hardrict has been in the public eye for over 17 years, gaining initial fame starring opposite her twin sister Tamera Mowry -Housley in the hit comedy Sister Sister from Paramount Television. On Sister Sister‘s successful six-year run, Tia won two NAACP Image Awards and three Kids’ Choice Awards for Favorite Television Actress. After graduating from Pepperdine University, she made appearances in various projects, including starring with her sister once again in The Disney Channel’s original movie Twitches in 2005 and again in Twitches Too, two years later. In 2006, Tia landed the role of “Melanie Barnett,” medical student turned wife of pro-football player on The Game, which landed her two more NAACP Image Award nominations.